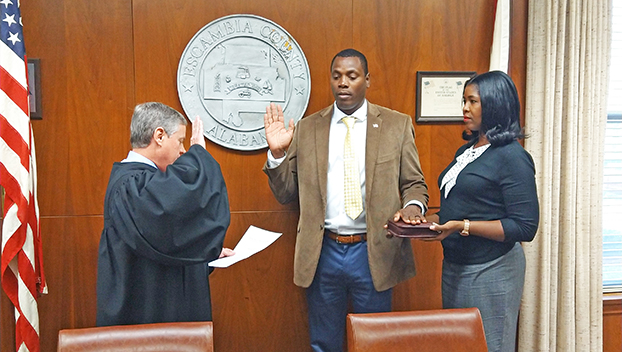 The Escambia County Commission held a regular meeting on Wednesday with the swearing in of three county commissioners conducted prior to action by the group.

Commissioner Steven Dickey was sworn into his office as District 1 Commissioner after he was re-elected to the seat in the recent election. Conducting the oath of office was Commission Attorney and former judge David Jordan. Dickey’s wife, Belinda, was on hand to hold the Bible used for the ceremony.

Commissioner Karean Reynolds was also sworn into his office as District 5 after his recent re-election to the seat. Reynolds’ wife was also on hand for the ceremony. Judge Eric Coale administered the oath for Reynolds.

Commissioner Larry White was sworn into his seat as District 3 commissioner after he defeated Scottie Stewart for the seat in the recent election. White had previously served on the commission for a number of years before being unseated by Stewart in the 2018 election for the position. White was joined by his wife, Diane, for the ceremony with the oath presented by Judge Jeff White.

• Approved posting a “no trucks” sign on Smith Dairy Road near Atmore. Commissioner Reynolds said the roadway had recently been paved and was not able to handle the heavy loads of trucks through the area. He sited complaints from residents in the area that the trucks that had been using the roadway were damaging the newly-paved road.

• Approved an agreement with the Escambia County Board of Education to increase School Resource Officers in the system from two to three. Sheriff Heath Jackson said a contract would be created to increase SRO presence in the school system with the ECBOE picking up the tab for the additional officer to the tune of about $60,000 per year. That would include the presence of the officer and any necessary equipment needed to fulfill the duties of the position. Jackson said there had been no contract in place in the past and a contract outlining the duties of the officer to the system would be put in place with BOE officials.

• Approved a meeting schedule for the commission keeping the current schedule of meeting each second and fourth Monday of each month with administration meetings set for the Tuesday prior to each meeting.