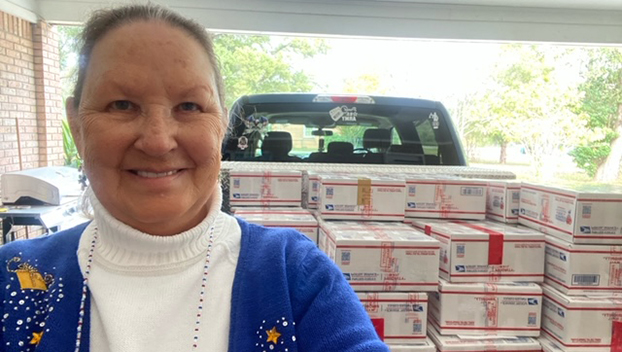 Rene Bunch is shown with the care packages she placed in the mail recently. | Submitted photo

René Bunch’s eyes welled with tears when she describes how the Military Parents Operation Support makes her feel.

The Military Parents Operation Support originated in April 2019 with one military mom’s vision of a group whose sole mission would be to send care packages to deployed military not receiving mail. Members from all over the states and globe are sent mail.

Bunch, a U.S. Air Force veteran, sent 39 care packages to deployed military members in Alaska and in the Poland area.

“We send year round,” Bunch said. “We send to where we’re requested.”

Bunch said family members of those serving provide addresses for the packages.

“If they request something specific, we try to get them those items, whether it be toiletries or smaller items,” she said. “Boot soles are popular. They go through them like I don’t know what. We send whatever they ask of us.”

The Military Parents support group consists of more than 550 parents, family members and active duty. The primary goal is to get needed toiletries and food items to as many deployed military as possible. More than 30,000 care packages have been sent. All of the organizing to assemble the packages begins on the group’s Moms on Deck Facebook page. Someone in the chain of command contacts a page admin and then the admin sends the name and address directly to a member.

Each address has 10 or more members who send, depending on the size of the requester’s unit. All packages are shared, which is common, Bunch said.

“We try to send as much as we can,” Bunch said. “There are now, after working this for so long, there are several groups and people and churches and that now send stuff. I’ve gotten donations of stuff. The Poarch Boys and Girls Club wrote Christmas cards this year.

“A friend of my cousin that I never met, whose neck I’m going to hug so hard, he’s an Atmore alumni that lives in Georgia, and twice a year he sends me money to help,” she said.

Bunch placed the 39 care packages in the mail Nov. 22, and she said she hopes they’ll arrive in between 4-6 weeks.

“I’ve gotten some notes and stuff from kids,” she said. “They write, ‘Dear Ms. Rene, thank you for sending the care package.’ That makes my day and it touches your heart.”

Bunch said the group always takes donations, and encourages those who are interested in can find the group’s page on Facebook and check out the public posts.