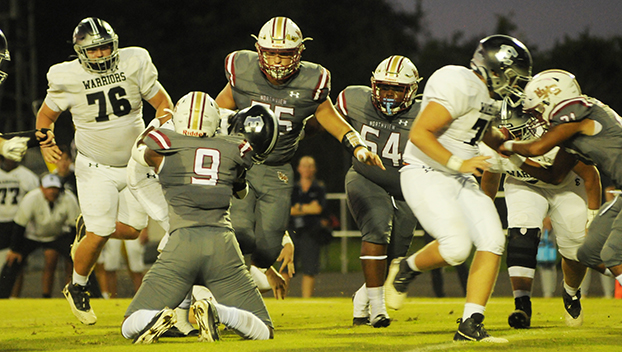 Northview’s John Michael Ward committed to play football at the University of South Alabama Tuesday in a ceremony at the Bratt, Fla. school.

Ward, the son of Carl and Melissa Ward, was recruited as an offensive lineman by some 15 schools, including USA.

“First off, it’s just so close to home,” Ward said. “It’s right down the road. It’ll be easy for me and my family and friends to come down to watch me play.”

Ward, at 6-foot-2, 270 pounds, said he likes USA offensive line coach Gordon Steele, adding that the coach knows how to get him to the next level.

Ward said the people are nice at USA.

“They’re kind of like me,” he said. “They have a hometown and little town feel. It’s exactly like living back home.”

During his senior season, Ward compiled 70 pancake blocks and proved a force on both sides of the ball.

NHS head football coach Wes Summerford said Ward is an outstanding person, and that’s a credit to his family.

“His parents are outstanding people, and he has a big brother (Luke) that’s always been there,” Summerford said. “Luke, who went on to play college football, laid the foundation for John Michael to follow. John Michael has been an asset to our program, and he’s been a leader in the locker room and at practice.”

Summerford added that Ward was a part of the offense that made them go.

“Just being on the offensive line, that just shows how unselfish he is,” the coach said. “That’s a credit to a lot of his success.”

Ward said having Luke in his corner has been huge.

“Ever since we were little, my brother would make me help him with his work,” Ward said. “That reflected on me improving my foot work. Yeah, I may be big, but I have quick feet and I’m fast. I was guarding my brother and he helped a lot with that.”

“It almost feels like you’re accomplished,” he said. “Somebody wants you to play on their football team. I think only 2.9 percent of high school players go and play D-1 ball. I really appreciate the offer to play.”