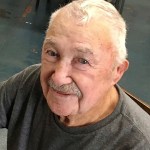 He was born on March 9, 1941 in Perdido to Gary and Laura Levins Welch. Ray served in the United States Air Force and was employed with the oil refinery industry.

He is preceded in death by his parents; and his brother, Curtis Welch.

He is survived by his wife, Joann Rackard Welch of Indian Mills; his sons, Don (Barbara) Welch, Kenny (Darlene) Welch, Larry (Karen) Welch, all of Indian Mills, and Michael (Kelly) Welch of North Carolina; his sister, Shirley Welch Wyatt; along with many grandchildren and great-grandchildren.

Internment will follow at a later date at Pine Barren Baptist Church Cemetery.