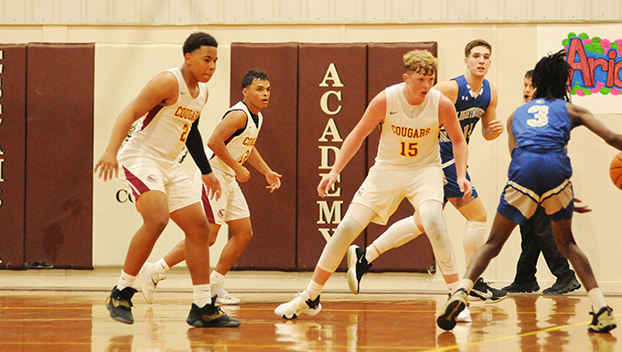 Escambia Academy’s Justin Davis and Charlie Sasser finished in double figures to help lead the Cougars to a 66-18 victory over Sparta Academy in Evergreen on Dec. 30.

Davis led EA with 17 points, 12 of which were 3 pointers; and Sasser contributed 15 in the victory. Luke Bell put up nine points with 12 rebounds.

EA boys basketball coach Jerome Webster said the boys have been working hard on their man to man skills and ball pressure. He added that in this victory, the defensive transition was one of the keys to victory.

“We definitely upped our game that night,” Webster said. “I’m proud of the boys. They’re learning as we go, and we have some great defensive intensity.”

Webster said he believes with AISA Class 1A, Region 2 play coming up, the boys are going to make a good run.

The Cougars next play Oak Park Academy on Friday at home. Their first regional game is Jan. 10 against Snook Christian in Canoe.