A Stockbridge, Ga. man was arrested Jan. 4 on drug charges, according to the Atmore Police Department. 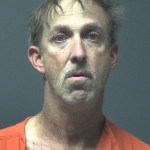 Public Information Officer Sgt. Darrell McMann said in a release that Jason Sanders, 49, of Stockbridge, was arrested and charged with possession of a controlled substance and possession of drug paraphernalia.

McMann said on Jan. 4, at approximately 3:50 a.m., APD officers responded to the Southland Hotel on Highway 31 in reference to a disturbance.

“When they arrived on scene, they contacted the suspect, Sanders, as he was sitting in his vehicle with the driver side door open,” McMann said. “Sanders told the officers he was being held against his will in his hotel room by unknown people. While observing him, the officers suspected he was under the influence of some type of narcotic.”

McMann said officers were then given consent to search Sanders’ hotel room.

Sanders was transported to the Escambia County Detention Center in Brewton.