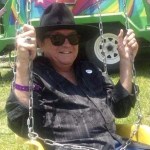 He was born on Dec. 29, 1953 to Curtis Edward and Pearline Daughtry McGhee.

He is preceded in death by his parents; his wife, Lori Patterson McGhee; his grandchild, Alayna Blaire Knowles; and his grandparents, Chief Calvin and Joyce McGhee, and Jack and Nora Daughtry.