Monday’s Cal Ripken T-ball game between the Alto Products Cardinals and the Atmore Utilities Blue Flames ended in a tie with the teams finishing knotted at 10.

The Blue Flames seemed to have control of the game early as they scored six runs in the first inning with T.J. Pettway, Brian Brown, Jaccorrian Forney, Chris Johnson and Ayden Bonner all scoring

The Cardinals cut the lead from six to three in the bottom of the inning as JaKyeria Wilson, Zander Crawford and Rease McGill made the trip around to homeplate.

In the second inning, the Blue Flames extended their lead back to six as Duke Pettway, Luke Bell and Brown all scored runs, but in the bottom half of the inning, the Cardinals cut the lead back to five as Davin Brown was the only batter able to score for his team.

The Cardinals’ defense stepped up in the top of the third as they only allowed one run to score with Anthony McCants coming across the plate for the Blue Flames.

With the score 10-4 heading into the bottom of the third, the Cardinals were looking for a miracle and received one as Crawford, McGill, Chaston Helton, Mattie Lopez, Ethan Prestridge and Brown all scored to tie the game at 10 with the time limit being called.

The Tri-Co Electric Shockers came one run away from knocking off the Atmore Utilities Blue Flames as the Blue Flames were able to escape the matchup with a 15-14 victory.

A three-run first inning opened the game for the Shockers as Katelyn Harrison, Landon Chavers and Payton Gilchrist all scored.

The Blue Flames responded with four runs in the bottom half of the inning as T.J. Pettway, Duke Pettway, Anthony McCants and Jaccorrian Forney put their team in the lead.

The Shockers had a huge inning in the second as they added eight runs to the scoreboard with Kinkade Hadley, James McElhaney, Andrew Guy, Brodie Black, Terry Montgomery, Harrison, Jones and Gilchrist scored to put their team on top 11-4.

It came down to the final inning with the Shockers only scoring three runs as Hadley, McElhaney and Guy scored.

Three runs would not be enough as the Blue Flames bested them with six as Bonner, Helton, Coker, Brown, Faith and T.J. Pettway gave their team a 15-14 win. 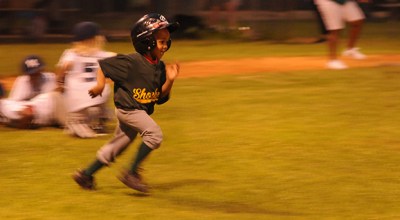 Atmore Cal Ripken baseball is back