With a week under their belts, players for the Escambia County Blue Devils are quickly learning what it takes to play for new head coach Mark Heaton.

Heaton has taken the first week of spring practice to show his team exactly the pace and tempo that he wants them to work at in practice as well as in games.

On Thursday, the fourth day of practice, the Blue Devils had already made progress in the eyes of Heaton.

Heaton said things have been going well with progress continuously being made.

“The kids are really trying,” Heaton said. “They are adjusting day-by-day. I can tell that every day that goes by they get a little better at moving at the tempo that I want them to go at. I have seen improvement at each practice.”

With more than 70 players coming out to spring practice, Heaton has been able to make small judgments about his team and find positives and negatives.

Heaton said he has found strength in his quarterbacks as well as in the secondary.

“I think our depth at quarterback is extremely promising,” Heaton said. “Rico Stallworth, Marshall Rolin and Chris Johnson offer us the opportunities at doing different things and moving them around to several places on the field. The secondary has great depth, and i think the defensive line will be a strong group.”

However, there is still some positioning to be figured out on the defensive side of the ball.

According to Heaton, the linebacking corp is still up in the air, while he and his coaches decide what players would be the best fit at those spots.

As far as what his team has to work on to be prepared for the 2010 season, Heaton said he has narrowed down on some key points of interest.

“We really need to work on mental toughness,” Heaton said. “The guys aren’t mentally tough right now, and we are trying to fight individual battles. We also need to become a little more unified. We are having to throw away being an individual and start over. That will take time, but ultimately that is what will be a determining factor in how successful we are.” 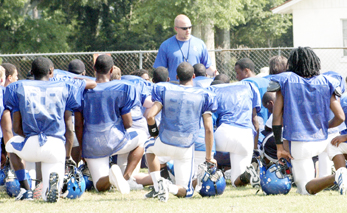 First-year ECHS Head Coach Mark Heaton speaks to his players before the start of their fourth day of spring practice. | Photo by Chandler Myers

With the Blue Devils’ spring game at Robertsdale less than a week away, the team is working towards achieving one main goal.

Heaton said he wants his team to worry about each other and not themselves.

“Right now, our goal is to focus on becoming a team,” Heaton said. “I don’t want these kids worried about what position they are going to play or how much they will play. I want them focused on how we come out of this spring practice, and that should be as a team. If we do that then we will be successful.” 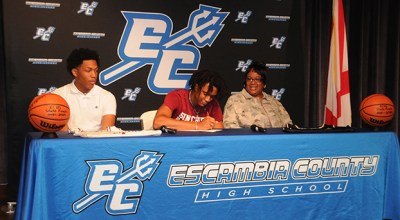