Butler County educator and Monroe County native Joseph Dean was unanimously hired by the board to be the next principal at ECHS after recommendation from Superintendent of Education Billy Hines who handled the interviewing process.

“It is very fortunate that we were able to get Mr. Dean and I’m tickled to death about it,” Hines said. “I know that he is going to bring a lot to Escambia County High School. I’m excited for school and for our county that we have a man of this caliber to come on board with our school system.”

Negotiations for a three-year contract for Means failed due to a lack of a motion during the March board meeting. Means’ last day at ECHS will be May 31 and Dean will take over immediately on June 1.

Dean said he is excited about taking on the challenges faced at Escambia County High School head on and looks forward to moving the school “in the right direction.”

“I’m thrilled for this opportunity,” Dean said. “I know it’s a task and one that I’m definitely willing to take on. Like I shared with Mr. Hines, if you’re somebody that’s fond of schools that are undisciplined – pants sagging, people not getting to work on time and things of that nature – just leave me where I’m at. I cannot tolerate those types of things. I’m ready to go to work, ready to get started and do everything I can to help Escambia County High School.”

Dean, 38, taught in Monroe County as a history teacher and Conecuh County as both a physical education and math teacher and served as football coach for nine years. He has spent the last six years of his 15-year educational career in administration, which began as assistant principal at Greenville High School in Butler County.

“He was noted for his discipline and moving that school in the right direction,” Hines said.

After a year in Greenville, Dean was named principal at Georgiana High School where he spent three years. He later served as principal at Butler County Magnet School. When former Butler County Superintendent Mike Looney left the system earlier this school year for another job, the school board appointed Dean as acting superintendent and has served in that capacity for nine months. 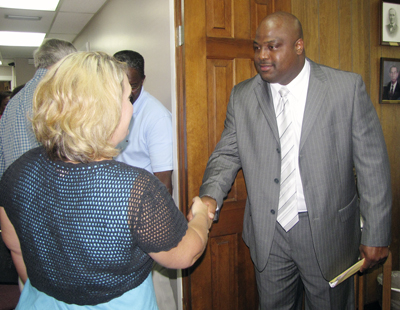 Joseph Dean was welcomed by several Atmore residents and Escambia County High School teachers after being named the school's principal during Thursday afternoon's school board meeting in Brewton.|Photo by Adam Prestridge