Smith was hired by the Escambia County Board of Education earlier this month as a special education teacher and assistant football coach.

He comes to Escambia County High School after spending the last several years just across the state line at Northview High School where he also worked alongside Heaton.

Smith said it feels good to be working with his old teammate and coworker again.

“It feels really good,” Smith said. “To have an opportunity to work with Coach Heaton again is great. This is a friend I went to high school with. I also saw this as an opportunity to help turn another program around.”

Smith and Heaton grew up together playing football at Demopolis High School before both going on to play at the collegiate level.

Heaton said choosing Smith to be on his staff was easy given the coach’s character.

“One of the first things I look for in a coach is character,” Heaton said. “I want our kids to have strong character and good morals, so I want to make sure they are surrounded by people and coaches who lead by example. I’ve known Karl my whole life, and I know what kind of person he is.”

As a part of the Blue Devil coaching staff, Smith will coach the defensive line as well as the tight ends.

Smith’s experience for the job comes from his time as a coach at Northview as well as his playing days.

Not only did Smith play defensive tackle for Northview, but he also walked on and played for four years at the University of Alabama.

Smith said he wants his defensive line to always go after the ball, and added he has been impressed with what he has seen from them so far.

“As a coach, I want my group to be a disciplined, well-coached and agressive defensive front,” Smith said. “I’ve had a great impression of them thus far. I saw them on some game film, and I like what I have seen. I saw a tremendous amount of potential from them.”

Smith’s approach to coaching is much like his style of teaching.

In the classroom, Smith will work as a special education teacher doing co-teaching.

Smith said he puts the same amount of focus into his classroom as he does on the gridiron.

“I have the same intensity in the classroom as I do on the football field,” Smith said. “I just do my job. I don’t do anything special, I just find something I’m comfortable with and go from there.”

Heaton knows the type of teacher that Smith is.

Heaton said knowing that Smith is a good teacher helped choose him for the job.

“One of the most important things is that he is a great teacher,” Heaton said. “He’s not only a good football coach, but he does a wonderful job in the classroom. Any time you get a guy who can teach and coach well is a bonus. We are fortunate to have him.” 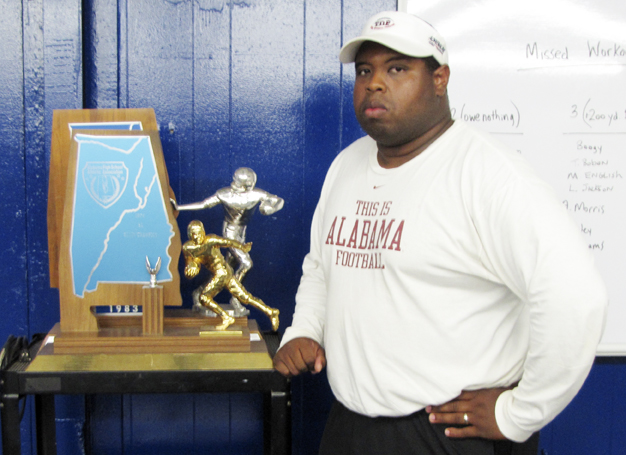