In a visit to Wednesday’s Atmore Lions Club meeting, Escambia County Blue Devils head football coach Mark Heaton delivered a message that promised change for how the team performs on and off the gridiron.

Dressed to represent ECHS in a blue polo, Heaton stepped to the podium to share with members of the club how things are going to be changing on the football team as well as in the school.

Heaton started by telling the club how things have become much different since he arrived at the school in the midst of the spring semester, saying things are much “brighter” now than they were previously.

“When I walked through the front doors of the school on April 19, it was the darkest place that I had ever walked into,” Heaton said. “I knew what challenges were in front of me though, and I knew the Lord had prepared me to face them. Things are different now because every day that I go to the school, I try to shine some light into it, and with my coaching staff, I have surrounded myself with people who will also try to brighten it up.”

Aside from he and his staff, the administration is another aspect of the school that Heaton sees bringing on change.

Heaton said that the administration has completely changed, and added that working with new ECHS principal Zickeyous Byrd has been good.

“I walk into the front office, and the entire face of the administration has changed,” Heaton said. “Mr. Byrd is a great guy to work for, and I’ve enjoyed working with him the last two weeks. I’m really looking forward to working with him even more once school begins.”

After speaking on the challenges that are ahead of him and also that have been completed, Heaton told the Lions Club his hopes for the football team.

Heaton started by saying how things have progressed from spring training until the current summer workouts.

“We started spring with 115 kids,” Heaton said. “By the end of spring, we had weeded it down to 85 and now we have 60-65 kids at summer workouts, and if we dress that many this fall, then I’ll be ecstatic. Kids are excited to be a part of this. We have some that will be seniors that haven’t played football before, and they are out there every day. It’s not just about football, it’s about molding their lives.”

Another aspect of improving the football progam involves academics.

In the fieldhouse at Herbert Barnes Stadium are greaseboards for GPAs. Each class has one and they will be monitored by their coaches.

Heaton said he has standards for his team, and added those that meet those standards will be rewarded.

“We want our players to have strong grades and good GPAs,” Heaton said. “Each coach will be assigned a grade to monitor for over GPA and a at the end of each nine weeks, the class with the best GPA will get a pizza party or something to be rewarded with.”

The timeline that the Blue Devils coach has on his program is not one that will be easy.

Heaton said that he wants to have this program on the right track this time next year.

“I plan to turn this program around in one year,” Heaton said. “I want to make it a top-notch football program in this state, but I can’t do it alone though. People always ask how they can help, and I tell them when Aug. 27 gets here to be in that stadium. I want everyone in that stadium to see what’s been done. That stadium will be clean, and there will be good kids with character and integrity on that field.” 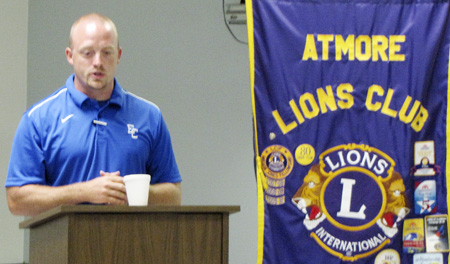 Chief taking his game to Huntingdon

Another area football player has committed to playing football at the collegiate level this fall and will take his game... read more