The volleyball nets are back up at Esambia Academy as the Lady Cougars have begun practicing in preparation for their opening game at Marengo Academy on Aug. 21.

The Lady Cougars are under new leadership with Chad Weaver taking the reigns along with his sister in-law, Tammy Garrett.

Weaver, who has played volleyball for 20 years, said he is excited to be coaching at the Academy.

“This is my first year coaching,” Weaver said. “I’m excited though because, we have a wonderful group of girls, and the school has been extremely welcoming.”

The Lady Cougars are currently practicing on Mondays and Thurdays from 5 p.m. until 7 p.m.

Weaver said Monday was the team’s third practice, and added he is trying to build a team chemistry.

“Monday was our third practice of the summer, and things have been going well,” he said. “Our first time meeting, I told the girls that our mission was to build a team atmosphere. I have three seniors, and I told them we are looking for leaders, and that our varsity team needs to be leaders for the junior varsity.”

Aside from building a strong team bond, the Lady Cougars’ new coach is also working on a certain technique of the game.

Weaver said he is trying to harness in the team’s serving ablity.

“One thing we are really working on is how we serve,” he said. “I’ve been telling the girls that it’s not how hard they hit theball, but that they keep it in play. Teams now get points for keeping the ball in play, so we must do that to be successful.” 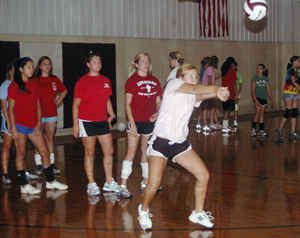 Cougars open season ranked at No. 9

After an impressive run to the AISA state semifinals last season, the Escambia Academy Cougars are returning this season with... read more