Escambia Academy opens the 2010 season on Aug. 20 at home against their rivals, the Sparta Warriors, and the Cougars have hit the field to begin preparing for their opener.

The No. 9 Cougars are in their second week of practice as they have begun working in full gear.

Cougars head coach Heath Gibson said his team is in good condition as they work in the summer heat.

“Practices have been going good so far,” Gibson said. “The guys are working hard, and dealing with the heat well. We are coming into the season in really good shape.”

As they prepare for the 2010 season, the Cougars area learning a bulk of new things including new offensive and defensive playbooks.

Gibson said offensively his team is beginning to understand the new material.

“Our offense has excelled pretty well with the new system,” he said. “We just have to lock down, who plays were. Once we get through this week, we should have a good idea of who will help us and where.”

Defensively, the Cougars will run an entirely new system.

Gibson said the Cougars have made the switch from a 4-3 defense to a 4-4, and added the defense is doing a great job of learning their assignments.

“With our new defense, the team is really understanding what they have to do,” he said. “We made a lot of changes, and they are picking it all up very quickly.”

With the opener just 16 days away, the Cougars’ head coach hopes his team just remembers everything they are learning in practice.

Gibson said he wants them running everything at full speed once the first game gets here.

“I would like both units to be running at 100 percent efficiency by the Sparta game,” he said. “I just want the offense to limit penalties and the defense to know what they are supposed to do.” 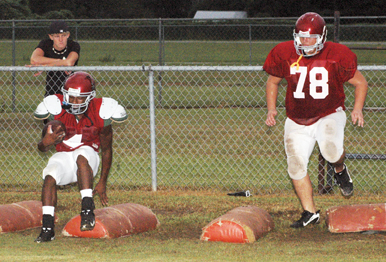 Escambia Academy Cougars run through a team drill during Monday’s practice at Bachelor Field. The Cougars are learning new offensive and defensive sets for the upcoming season. | Photo by Chandler Myers

The volleyball nets are back up at Esambia Academy as the Lady Cougars have begun practicing in preparation for their... read more