‘83 Blue Devils to be honored

A storied team will return to Herbert Barnes Stadium on Sept. 17 when the Escambia County Blue Devils face off against the W.S. Neal Blue Eagles.

At halftime of the game, players, cheerleaders and managers from the 1983 state championship team will be recognized for their accomplishments.

Blue Devils head coach Mark Heaton said that the purpose of bringing the championship team back is to bring around tradition.

“Our main purpose of honoring this team is to bring back tradition to this school and football program,” Heaton said. “The kids are trying to put some tradition back into this program, and I think we are headed in the right direction. We want to get as many of those people that were involved with that team to participate in this event as we can.”

One person that will be honored at that game is one of the people helping head up the halftime ceremony.

Buck Powell, the head coach for 1983 Blue Devils, is helping Heaton round up members of the 1983 team.

Powell said its good for the team to be honored at the Neal game.

“It’s great for this team to be recognized,” Powell said. “Those kids played tremendous football, and they accomplished so much.”

Instilling tradition back into the Blue Devils is one of the goals for Heaton, his coaching staff and team.

Heaton said that putting tradition back into the school is more than just winning football games.

“Tradition is essential where we are at,” Heaton said. “Tradition is not just about winning. It’s a standard that needs to be set. Tradition is something that is carried over year after year by that standard that has been set. It’s about commitment that involves the players and coaches.The people in the Bible had a tremendous work ethic, and did what the Lord asked them to do. Putting tradition back in this program comes from attitude and work ethic.”

As for putting tradition back into ECHS, Powell thinks that Heaton has already started.

The former coach said Heaton is putting tradition back in place at this moment.

“He’s already doing that,” Powell said. “Coach Heaton is doing the things that need to be done like instilling discipline, which has been needed. Also with Mr. (Zickeyous) Byrd and his administration now at the school, they will do a good job of working together to incorporate that into a good environment.”

Anyone that is participating in the event at Herbert Barnes Stadium is encouraged to be present at the game at least 30 minutes before the coin toss.

Heaton said that an earlier presence will help get a consistent list of people who are taking part.

“We would love for them to be there by 6:30 p.m.,” Heaton said. “We want them to meet at the pass gate by the field house where they can get in with one guest. It’ll give them a chance to meet with coach Powell, so we can get a list together to know who is participating.” 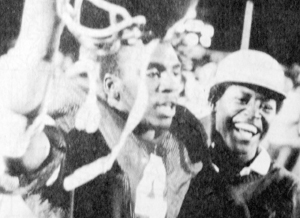 Thursday night will mark the 2010 debut of a coach’s show on Legends 105.1 WPFL hosted by Lou Vickery at... read more