With less than a week until the Escambia County Blue Devils take the field for their jamboree at Linden, the offense is still looking to perfect their execution.

The Blue Devils have retained a lot of information from their spring and summer work, according to head coach Mark Heaton, but they are still getting used to new additions.

Heaton said the offense is behind the defense in terms of how far they have come.

“The offense is a little bit behind the defense,” Heaton said. “We have had two weeks to prepare before we have a game week, and tying into the things they already know has been tough. They have assignments down, but we need to get in more reps to get our execution crisp. I want us to be as ready as we can before T.R. Miller on Aug. 27.”

One thing known about the Blue Devils offense is the talent they bring on that side of the ball.

Heaton said his backfield is strong no matter what formation they line up in.

“The versatility of our backfield is great,” Heaton said. “We have so many guys who bring something to the table there. We have quick, agile backs that can do damage when we spread things out, and when we line up in our I-formation, we have some downhill runners who have really come on in the last week at practice.”

When it comes to throwing the ball, the Blue Devils have found a variety of wide receivers and tightends that can help make plays all over the field.

Heaton said he is excited with what he has seen from each player who is running passing routes for the Blue Devils.

“I’m very excited about our receivers,” Heaton said. “When you have a guy like Nick Flowers out there who has game experience, it’s always a plus. We have moved him from slot to the outside because in our system that’s where we place our possession receivers. Fred Henderson is our other X-receiver. He has really done a great job in the spring and workouts after not playing last year. Our slots are our playmakers on the field. Gavin Salter, Marshall Rolin and Nieko Williams are all really strong. Each of those guys has done a great job doing what we ask them to do. Our defensive leader, Damien Brown, has done an excellent job stepping in at tight end. We have some guys suspened, so he has been taking reps, and he’s been doing excellent.”

One place the Blue Devils are still working on offensively is their offensive line.

Suspensions have caused some players to get more reps than others, according to Heaton.

Heaton also said that there is great talent and ability on the offensive front.

“One of the problems we had early on is getting kids to practice,” Heaton said. “We have some guys suspended for missing practices or workouts, so other guys have been getting reps at those spots. We just have to find continuity there. Ability-wise, we have a lot of talent and potential, and a good thing is no kids have missed any work since the second day of practice.”

The Blue Devils travel to Linden for their jamboree on Aug. 20. 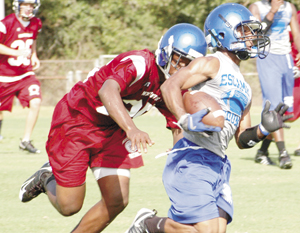 After playing their 2009 season in retro uniforms, the Escambia Academy Cougars finally get to put on their new Russell-made... read more