The Escambia County Blue Devils finally hit the gridiron Friday night for their jamboree game against the Linden Patriots and Hillcrest-Evergreen Jaguars in Linden.

The Blue Devils will look to work out any problems they might still be having with game situations against the No. 2 team in Class 1A as well as Hillcrest a competitor from Class 4A Region 2.

Blue Devils head coach Mark Heaton said he and his staff are working to put a base plan in action just to see what their players are capable of.

“We are trying to put a plan in place because we still have positions up in the air, and we are still trying to see where we want to put kids,” Heaton said. “This game will be a great measuring stick to see where we are at, and I’m just glad that it’s finally a game week. All of the preseason work is finally behind us.”

Playing a jamboree game gives the Blue Devils and their coaches a chance to see how far the team has come since they began spring training in May.

Heaton said the game allows the team to get any jitters out of their systems by working on the things they practice every day.

“One great thing about this game is it gives the team a chance to get out all of their butteflies,” Heaton said. “It also allows us to work on our kicking game, how we manage the game, and any personnel management we need to go over. Lets us work out all of the kinks we still have.”

When it comes to playing on offense or defense, the Blue Devils will look to perform their assignments correct.

Heaton said executing each play is the most important task that his team has to focus on at this point.

“Execution of our base offense and defense is really important,” Heaton said. “We will have a plan put together to add stuff in as we go, but we have to get our execution down this week.”

Success in the jamboree game will be measured not only on performance, but the attitudes of each player.

Heaton said he wants to see the best of his players on and off the field this week.

“We want to win,” Heaton said. “We want to go out and play a good football game, but we also want to show the character and discipline that we have worked on all summer long. I want everyone to see how well these kids act when we take the field.”

The jamboree featuring the Blue Devils, Jaguars and Patriots kicks off at 6 p.m. Friday night. 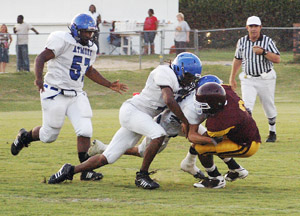 The Escambia County Blue Devils travel to Linden Friday to take on the Linden Patriots in a jamboree game.|Photo by Chandler Myers

Game week is finally here for the Escambia Academy Cougars which will open their 2010 season Friday at home against... read more