Escambia County High School traveled to Linden Friday night to take on the Linden Patriots and Hillcrest-Evergreen Jaguars in a jamboree contest with Atmore’s team finishing the night 1-1.

The Blue Devils were defeated in their first game of the night 21-6 by the Class 1A, No. 2-ranked Patriots, but bounced back to hold off the Jaguars 6-0.

Blue Devils head coach Mark Heaton said his team came out unfocused in their game against the Patriots.

“Throughout our first game against Linden, we missed a lot of assignments,” Heaton said. “We also had a lot of turnovers at crucial points in the game, which really held us back.”

Against the 2009 state runner-up, the Blue Devils played a physical match up that saw them receive a high level of competition.

Heaton said his team had to fight some battles to stay in the game.

“We got beat up physically,” he said. “Our guys faced a lot of adversity, and at times they gave in a little bit.”

Things started to improve towards the end of the game with the Blue Devils getting on the scoreboard with a touchdown, according to Heaton.

The Blue Devils first-year coach said that receiver Gavin Salter scored on a sweep play to give Atmore six points.

“Gavin came around on a sweep and really did a great job of getting into the end zone for us,” Heaton said.

In the second game, the Blue Devils defense held their own against the Jaguars.

Some players that were suspended for the first game against Linden returned to the field against Hillcrest, according to Heaton.

Heaton said his defense played strong in holding off the Jaguars in the game.

“With some of the guys that came back from their suspensions, our defense really stepped up in the second game,” Heaton said.

With the T.R. Miller game less than a week away, the Blue Devils will go back to work Monday to improve their execution of plays.

Heaton said he was proud of his players, but added he knows what improvements need to be made.

“I’m very proud of our guys for how they came back and played in the second game,” Heaton said. “We just need to improve our execution, and settle down to focus on each play individually. We played sloppy, and that comes back on me. I have to do a better job of having our kids prepared for the game when we take the field against T.R. Miller next week.”

The Blue Devils and T.R. Miller face off next Friday, Aug. 27 at Herbert Barnes Stadium in Atmore. Kick off is at 7 p.m. 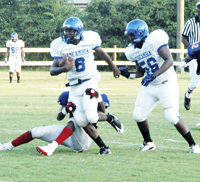 Escambia Academy’s opening game of the season was filled with big plays and big hits as the Cougars rolled through... read more