Character and discipline are qualities that first-year head coach Mark Heaton has looked to instill in his players since he stepped on campus on April 19.

One of his Blue Devils has taken on those qualities in the head coach’s eyes and put forward the effort necessary to become a great football player.

Gavin Salter, a senior slot receiver for the Blue Devils football team, worked hard during spring training and summer workouts, and said he is ready to get the season started.

“I’ve been looking forward to getting into the season,” Salter said. “We have been working hard, and the team wants to make the playoffs and compete for a championship.”

With a player like Salter on his roster, Heaton sees good things athletically and mentally.

Heaton said Salter is a player who always brings something to the table.

“Gavin is a tremendous person,” Heaton said. “He’s a very good kids, and that’s what I like about him. He always has a smile on his face, and he’s always bringing in a positive attitude along with a strong work ethic to this team. He’s also an exceptional athlete. He has great quickness, good hands and always makes a big play when he touches the ball.”

Salter has bought into the message his coach has brought to the Blue Devils.

The senior receiver said he has enjoyed playing for Heaton, and added that he has learned good lessons.

“I really love playing for him,” Salter said. “It’s been a great experience, and I’ve learned how to build character, to fight through adversity and step up as a leader on and off the field.”

In taking what Heaton has taught his team, Salter tries to exemplify each of the qualities that are expected of he and his teammates.

Salter said he tries to step up and do what is right for his team.

“I try and build more team unity be being a vocal leader and setting an example,” Salter said. “I do what I’m told, and do what I know is right. I want it to help us become more successful, so we can win more games.”

With the season beginning in two days, Salter has big goals set ahead for his team.

Salter said a successful season would include more than a trip to the playoffs.

“A home playoff win would make this season great,” Salter said. “We have to work hard every day, but we can do it. I also want the team to bring the community together, and win championships.”

Salter and the Blue Devils take the field against the T.R. Miller Tigers Friday night at 7 p.m. at Herbert Barnes Stadium. 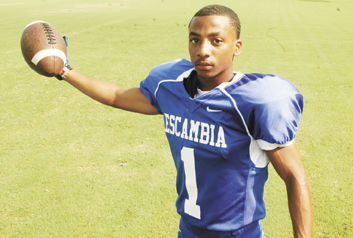 With an opening week victory under their belts, the Escambia Academy Cougars will travel to Grove Hill to take on... read more