Following a heart-stopping victory last Friday night at Bachelor Field, the Escambia Academy Cougars are back on the practice field this week preparing for their second region game.

The Cougars (2-1, 0-1) host the Marengo Academy Longhorns in Canoe this week looking to earn their first region win of 2010.

Heading into this week’s contest, the Cougars will look to improve on each side of the ball, according to head coach Heath Gibson.

Gibson said each unit of his defense must be ready mentally and physically for this week’s game.

“Our defense has to play with an aggressive mentality this week,” Gibson said. “Our linebackers must fight hard and play downhill. They also need to know their assignments. Our ends and defensive tackles must control the line of scrimmage especially against a run-first team like Marengo. They won’t throw the ball around much, but our defensive backs must be aware at all times, so they are not beaten deep.”

Offensively, the Cougars showed sparks of life early in their game against Jackson scoring all 24 of their points in the first half.

The second half was a different story as they were contained and fought off two penalties that would have been touchdowns.

Gibson said the offense must focus on working together and getting the ball down the field.

“Our offense has to remain focused throughout the game,” Gibson said. “Michael Thompson must continue to grow up for us. He has done a good job of running the spread option and executing each play. We also need Wesley Steadham to stay healthy because getting him touches is key to winning.”

With the possiblity of going 0-2 in the region a factor, the Cougars coaching staff want their players to give this game everything they have.

Gibson said winning will be what he sees as success this week.

“Just winning,” Gibson said. “We are 0-1 in the region, so this is an important game for us. To be successful, we must win. No matter how we get it done, we have to win.”

The Cougars and Longhorns kick off at 7 p.m. Friday night at Bachelor Field. 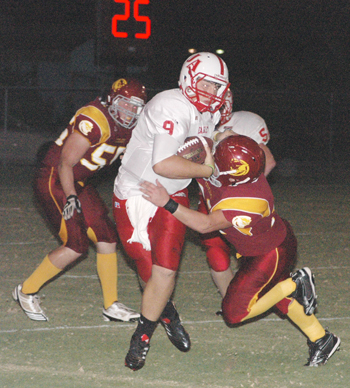 The Escambia Academy Cougars look to improve to 3-1 this week when they face region opponent Marengo Academy in Canoe.|Photo by Adam Prestridge

A storied team will return to Herbert Barnes Stadium on Sept. 17 when the Escambia County Blue Devils face off... read more