Missed opportunities spelled disaster for the Escambia County Blue Devils Friday night at UMS-Wright’s Cooper Stadium as the Blue Devils fell 31-6 to the No. 4-ranked Bulldogs.

The Blue Devils (2-1, 1-1) fell behind the Bulldogs early and were never able to recover from the deficit.

Blue Devils head coach Mark Heaton said UMS-Wright made the most of their chances and jumped out to a three-touchdown lead by halftime.

“Well we gave them a couple big plays early in the first half,” Heaton said. “Those plays put us so far behind that we had a hard time fighting back through it. After halftime, we felt like we played a lot better, but spotting a team as good as they are 21 points is hard to come back from.”

The Bulldogs were already up 7-0 when they blocked an ECHS punt deep in Blue Devils territory leading to their next touchdown and a 14-point lead.

Late in the second quarter, the Bulldogs ran a toss-sweep and a missed assignment on that play led to another touchdown, according to Heaton.

In the second half, the Blue Devils came out with more fight as they held the Bulldogs to 10 second-half points and scoring six of their own.

The Blue Devils lone touchdown came from running back Demetric Henderson who pushed his way in from two yards out early in the fourth quarter.

Heaton said the second half was much better for his team, but added that the game could have been closer.

Next week, the Blue Devils host W.S. Neal, which was defeated 54-14 by Jackson Friday night, as they look for their second region win of the season.

Heaton said his team will not change anything they do because of the loss.

“We are going to prepare like we do every week,” he said. “We aren’t going to change what we do. We were in the position to make plays, but we didn’t do it. Our team had the opportunity to get things in our favor and it just didn’t happen. We have to stick to our plan.”

The Blue Devils and Blue Eagles kick off next Friday at 7 p.m. in Atmore. 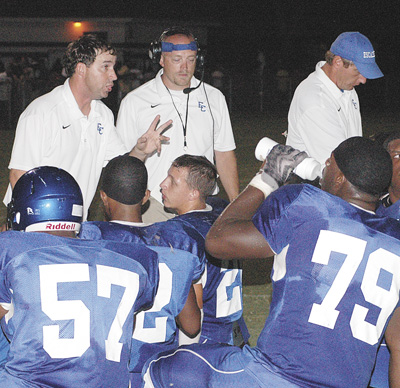 Northview opened up its district play with a huge 27-20 victory against the South Walton Seahawks at South Walton Friday... read more