The Cougars of Canoe hit the road again this week traveling to Butler to take on the Patrician Academy Saints in an important region game.

The Escambia Academy Cougars (3-2, 1-1) are looking for answers on the defensive side of the ball after giving up 62 points in a loss to the Prattville Christian Academy Panthers last Friday in Prattville.

Cougars head coach Heath Gibson said this week in practice, the Cougars will change schemes and focus on stopping the run.

“This week, we are going to put everything into improving our defense,” Gibson said. “We are going to completely change schemes. We have been running a 4-4 defense, but we have to put more guys in the box, so we can stop the run. Patrician likes to go foot-to-foot and run a Wing-T and a double-wing offense, but I wouldn’t be surprised to see them drop back and pass the ball like the other run-oriented teams have done against us.”

Play in the secondary has been a woe for the Cougars since the season began with quarterbacks being able to find holes in coverage. EA has had shown some bright spots in that area though intercepting several passes.

Gibson said he has his defensive backs constantly working to improve how they defend the pass.

“We just work every week on trying to put guys in the right places,” Gibson said. “We have been running a lot of zone coverages, and when we do run man coverage, we have been trying to give them assignments that don’t have them so confused.”

Offensively, the Cougars struggled in the first quarter against the Panthers last Friday, but they look to come out more explosive this week.

Gibson said he sees where his team made mistakes last week, and added that they can make proper adjustments to avoid those problems again.

“We are going to put in a few more wrinkles,” Gibson said. “We missed a few blocks early in the game last week, but we figured that out and were able to adjust to get the option going. This week, we should be able to get moving without being flat.”

Patrician (2-2) picked up a victory against Flint Hill last week by forfeit, which gave the Saints a bye week.

Gibson said this gives the Saints a big advantage as the teams prepare for this week’s contest.

“It gave them an extra open week,” Gibson said. “They had that extra week to heal up, and we only have four or five days. It helps them a lot, but our guys will be ready for the challenge this week.”

The Cougars and Saints kick off at 7 p.m. Friday in Butler. 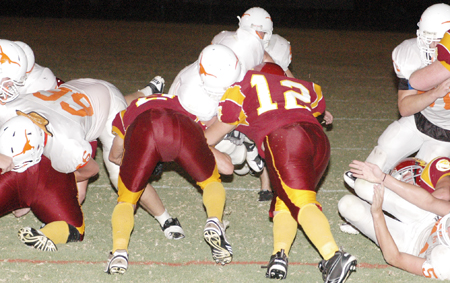 The Escambia Academy Cougars travel to Butler Friday night to take on the Patrician Academy Saints.|Photo by Adam Prestridge

Things are really beginning to heat up in the football season with the Blue Devils and Cougars approaching the halfway... read more