Running backs thrive on yardage and touchdowns. For Escambia Academy junior running back Jaylen Henry those two things have been pretty easy for him to come by since he broke out for the Cougars in 2009.

In 2009, the then sophomore rushed the ball 74 times for 1,026 yards and 16 touchdowns and it was assumed that those numbers would be hard to top.

Topping those numbers is an understatement for what Henry has been able to accomplish this season as he has already rushed for 1,980 yards and found the end zone 28 times.

Henry’s head coach Heath Gibson said he credits the increase in stats to Henry’s ability to improve his running style by working in the weight room and running track in the off season.

For Henry, the improvement in his game is something that he knows was needed in order for him to help his team.

The running back said he is more aggressive this season, and added he is less nervous when running the ball.

“Last year, I wasn’t aggressive enough,” he said. “This year, when I run the ball I make sure that I’m more physical and more aggressive to make sure I’m hard to stop.”

Like his coach, Henry sees the help that the weight room can do for a football player.

He said he saw that it would take hard work to better himself as a competitor and overall football player.

“In 2009, I didn’t hit the weight room like I should have,” Henry said. “I knew that if I wanted to become a better running back that I would have to workout harder and show a better work ethic to be better than I was as a sophomore.”

Another aspect of Henry’s game that has improved is his ability to know the plays as well as attack holes.

Gibson said Henry has improved his directional running along with how he handles defenders trying to make a play.

“Jaylen does much better job this season of running north to south,” he said. “Last year, he did a lot of east and west runs, but this year he moves down the field. He hits the holes a lot better too. He seemed a little shy when it came to running through gaps last season, but he does that now. He’s also learned to lower his shoulder and overpower defenders as well as change angles to break tackles.”

When it comes to running the ball, Henry’s mindset is focused on two things.

He said the first thing on his mind is getting the yards needed to move the chains, while the second is putting a score on the board.

“When I take a toss or a handoff, I’m thinking about running hard to get a first down,” Henry said. “Once I know I have the first down, I start thinking about making it all the way down the field for a touchdown.”

Henry’s style of running is one that his coach sees when he watches football on Saturdays.

Gibson said his running back runs much like a back for the Florida Gators.

“He reminds me of Jeffrey Demps,” Gibson said. “He has that burst and ability to break outside, but he also runs hard between the tackles. If you don’t stop him quick, he’s gone.”

Henry on the other hand sees himself trying to mold into a running back that plays in the NFL.

“Reggie Bush is my favorite running back,” Henry said. “I try to perfect my cuts and make them like he does when he runs the ball.”

With one more season left to go at the Academy, Henry has his eyes on a big prize.

He said he would like to set the rushing record for the state of Alabama, which is currently held by Kendal Gibson of Aliceville who rushed for 3,083 yards in 2000.

“I want to break the rushing record for public and private schools,” Henry said.

With an 11-game schedule and the carries coming to him, 2011 and the record he seeks could be Henry’s for the taking. 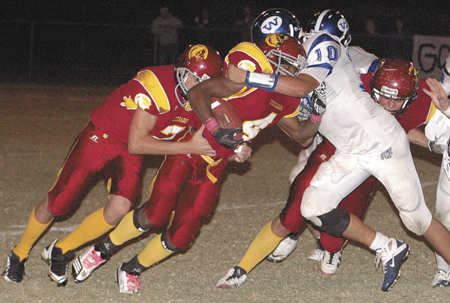 Escambia Academy Cougars running back Jaylen Henry has improved his running ability during his junior season.|Photo by Adam Prestridge