On a special senior night at Herbert Barnes Stadium, the Escambia County Blue Devils gave the Jackson Aggies all they could handle for four quarters as the Aggies found a way to escape Atmore with a 28-14 victory.

The Blue Devils (5-3, 3-3) showed how far they have come this season as they put up a scrappy fight with the No. 1-ranked Aggies even going into halftime tied at 14 with Class 4A’s top team.

The second-half proved to be the difference as the Aggies were able to find the end zone twice scoring in middle of the third quarter and late in the fourth quarter to pull away from ECHS.

Blue Devils head coach Mark Heaton said his team put it all out on the field against Jackson.

“It was a great game,” he said. “I’m very proud of the way our kids played and the character they displayed on the field tonight. We just didn’t get the stops when we needed to and offense couldn’t move the ball to the end zone when we needed them to. Both sides of the ball played tremendous and did a better job tonight though.”

The Aggies came out running on all cylinders as they opened the game with the ball putting together a nine-play drive starting at their own 45.

Running back Ledarrius Bowe was the workhorse of the drive picking up several yards including a one-yard dive into the end zone to put the Aggies on top 7-0.

Following the kick off, Atmore started out on their on 29 and would start with freshman Chris Johnson under center and Rico Stallworth at running back. Stallworth would move the ball 15 yards on the first two plays to get a new set of downs.

After the first two plays stalled, the Blue Devils went deep into their playbook and called a lateral pass to Stallworth who hit receiver Nick Flowers for a 64-yard bomb to tie the game at seven with Tyler Nero’s extra point.

The next two drives would stall for both teams as Jackson moved down all the way to the Atmore five-yard line and set them up for a field goal, but a botched snap allowed the Blue Devils to take advantage. Atmore was unable to find the end zone on their next drive being forced to punt.

The Aggies would begin driving again, but this time quarterback Dustyn Moseley would be caught trying to set up a screen pass that was picked off by defensive lineman Montez Curry who returned it to the 50.

The interception set up a 10-play drive down the field with Johnson and running back Chris Smith picking up yards at will.

With fourth-and-goal from the Aggies three-yard line, Johnson found Stallworth on a rollout pass to put the Blue Devils up 14-7 in the middle of the second quarter.

Jackson would not be denied though as they found the end zone in four plays as Moseley went to the air starting on the Jackson 20-yard line. He hit receives to pick up one, 34 and 19 yards on the touchdown to tight end Ransome Hare to tie the game at 14.

The Blue Devils would kill themselves on their next drive with penalties pushing them back forcing them to punt back to the Aggies.

Jackson would be unable to gain any momentum either as Moseley was picked off again this time again by Marshall Rolin, which would lead to another Atmore punt and halftime with the score 14-14.

Heaton said his defense really played to the best of their abilities.

“Our defense has a lot of character,” he said. “They play so hard and do whatever we ask of them. They really put it all out their on the field.”

With the beginning of the second half, the Blue Devils received the ball, but would stall as the Aggies forced them to punt.

Jackson took advantage of the ECHS misfortune and turned it into a eight-play drive down the field capped off by another connection from Moseley to Hare that put Jackson on top 21-14.

The teams would then trade punts as Atmore went three-and-out and forced Jackson to punt after it looked like they might march down the field again.

When Atmore got the ball back, Johnson would throw his second pick of the game setting up another Jackson scoring drive this time with Bowe scoring from three yards out late in the fourth quarter to put the Aggies on top 28-14.

Atmore would move into their two-minute drill, but time would run out on their upset attempt ending the game 28-14.

Heaton said his team is making the right strides to win games like Jackson.

“We are getting where we need to be,” he said. “We are right there, and we are one play away from winning this game. Kids are fighting and when their times comes they’ll be prepared.”

Next week, the Blue Devils travel to Monroe County to take on the Tigers. 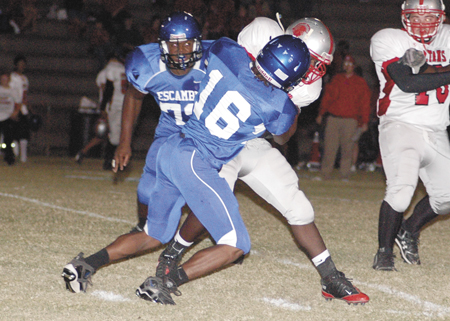 With a homecoming victory on the line, it all came down to a 50-yard field goal for Escambia Academy Friday... read more