With the postseason fully in their grasp, the Escambia County Blue Devils are using their final region game and the last two weeks of their season to become stronger as a whole.

The Blue Devils (5-3, 3-3) will look to improve every aspect of their game Thursday night when they take on the Monroe County Tigers led by coach Matt Blake.

After falling to the No.1-ranked Jackson Aggies last Friday, the Blue Devils will look to better themselves in some areas despite playing up to their competition last week.

Blue Devils head coach MarkHeaton said this game is must-win for his team to accomplish another goal.

“This is a region game that we have to win,” Heaton said. “We want to win every region game we play, so this is another opportunity for us to pick one up.”

When looking at the Tigers, the Blue Devils are taking into account several of their performances this season.

Heaton said they have played strong at times, while struggling at others.

“Monroeville has played extremely well at times this season, but they have also had their fair share of struggles,” he said. “They moved the ball well against Jackson picking up almost 200 yards, so we must be prepared to stop the run. They try to throw the around some too, but we think we will be OK in the area.”

Offensively, the Tigers run different sets to keep opposing defenses on their toes.

Heaton said they are versatile in how they run their offense showing different looks at different times.

“They get in a power-I set and run the ball at you one series,” he said. “The next set of downs they might line up four or five wide. They are versatile and make you prepare for a lot of different looks.”

From a defensive standpoint, the Tigers show different fronts during their games.

Heaton said he always prepares his team for different types of defenses.

“They are very fast on defense,” he said. “They have shown 40 fronts at times, but also get in some odd fronts. We don’t just prepare our offense for a couple of schemes. We always make sure to show them different things in practice.”

For the Blue Devils, finding success will come by controlling the tempo of the game.

Heaton said his offense needs to put up more points than they did against Jackson.

“Offensively, we need to move the ball better,” he said. “We need to score more than 14 points if we want to win. We will stay with what we have done very week. It’s all beginning to come together and those guys are finding an identity.”

With two weeks until the playoffs, the Blue Devils and their coaches are focused on getting better.

Heaton said he is excited to see what his team will play like in the postseason.

“We just have to get better during the next couple of weeks,” he said. “I’m really excited to see what these guys will do once they come together and are improved.”

The Blue Devils and Tigers play Thursday night at 7 p.m. in Monroeville. 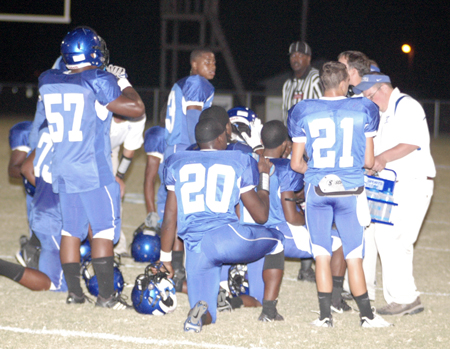 For the second time this season, a change will be made to the football schedule of the Escambia County Blue... read more