The atmosphere at the Chiefs’ Stadium is sure to be electric this Friday when the Northview returns to Bratt, Fla. to take on their rivals the Jay Royals in another important district game.

The Chiefs (5-1, 4-1) lost their first game of the season last Friday falling 28-13 to the defending district champion Freeport Bulldogs in Freeport.

With that loss the Chiefs currently sit in a tie for first-place of the district with Freeport holding the tiebreaker with the head-to-head win.

Northview is now looking to put that loss behind them as they begin to prepare for their match up with the Royals who have yet to win a game this season.

Chiefs head coach Sid Wheatley said this week’s game carries a lot of importance with a rival and a district game.

“This is another big game,” Wheatley said. “It’s another district game with a rival, so it’s important we come out and play well. Our kids are familiar with one another, so it will be an exciting game.”

For the Chiefs, a win would help put them back on track in their quest for a district championship.

Wheatley said his players need to focused on getting the job done against the Royals.

“We have goals set for ourselves, so we need to take care of business this week,” he said. “We need to be strong on both sides of the football and come away with a win.”

The Chiefs defense will be preparing for a running game that could swing out on a playfake for a pass.

Wheatley said the Royals have several running backs in the backfield who also catch passes.

“They run a fullhouse backfield with a straight-T” he said. “They also run some playaction, so we have to be ready for their backs to swing out on routes.”

On the other side of theball, the Chiefs are preparing for the same thing people have come at them with all season.

Wheatley said he expects the Royals to stack the line against his running attack.

“They are aggressive on defense,” he said. “They play a five-or six-man front, but we think they’ll walk another man up, so we expect a seven or eight players at the line.”

In order for the Chiefs to be victorious, they will need to have strong play from their lines.

Wheatley said he wants to see his linemen be strong up front, and added his defense needs to make their tackles.

“We need to play well up front on both sides of the football,” he said. “If we can be better at making tackles then good things will happen.”

The Chiefs and Royals kick off Friday at 7 p.m. at Northview. 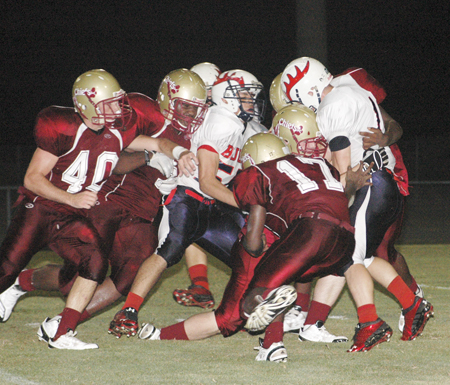 The Northview Chiefs host the Jay Royals Friday night in Bratt, Fla. The Chiefs are looking to get back on track after falling to Freeport last week.|Photo by Chandler Myers