Football around the Atmore area has seen some success this season with two high school teams earning winning seasons, but for one part-time Atmore native, the 2010 season could lead to a conference championship and a bowl game.

Josh Linam, the son of Atmore resident Kevin Linam, is the starting middle linebacker for the University of Central Florida Knights (5-2, 3-0), which are currently undefeated in Conference USA and one win away from becoming bowl eligible.

Linam said he is excited about the success his team has seen this season.

“I think overall we are having a great season,” Linam said. “We expected to be a good team, and our ultimate goal is to win a conference championship.”

In his first season as a starter, the junior from Tavares, Fla. is the third leading tackler for the Knights with 34 and has recorded four tackles for a loss and one sack this season.

His first start came in a 38-7 win against the University of South Dakota on Sept. 4, but in his second start he played on national television in a loss to the North Carolina State Wolfpack.

“The most exciting moments of this season were getting my first start and playing on TV against North Carolina State,” Linam said.

For Linam, each year that he has played for Central Florida he has bettered himself at his position.

He said that everything is coming together for him this season, and he has enjoyed helping his team be successful.

“Each year, I have progressed my talents and skills,” Linam said. “This year it all kind of clicked for me, and I have become a better linebacker. I don’t really have any personal goals set, but I just look forward to continuing to help my team get to our goals.”

Taking the field for a Division-1 football team is something that high school football players around the country dream about.

Linam’s ability to accomplish that dream is something that he doesn’t take lightly and he still feels the excitement and anxiousness in his junior season.

“I love the atmosphere on a gameday,” he said. “Just the feeling of butterflies before the game; hearing the people outside in the stadium cheering and knowing I’m about to take the field in front of 45,000 people is incredible.”

With one season left in his eligibility, the junior linebacker is ready to come back and help his Knights in 2011.

Linam said he has some goals he would like to accomplish in his senior year.

“I just want to have another great season,” he said. “I want our team to win a conference championship and earn a bowl bid. Personally, I’d like to record 100 tackles.”

Upon finishing his collegiate career, Linam has his sights set of continuing his career in athletics.

He said he would like to work in the performance industry or coach, but has not ruled out a jump to playing on Sundays.

“I would either like to become a head coach or work in sports performance,” Linam said. “I trained with John Davis to be ready for college, and I like the idea of helping athletes better themselves. At the same time, it’s always a college football player’s dream to play in the NFL, so I’ll see what happens.”

With five games left in 2010 along with a bowl game, Linam has plenty of time to decide on where he wants to make his next step, but one thing that is a given is he’ll be ready. 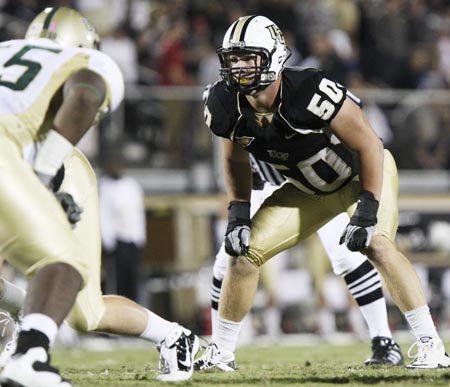 Josh Linam gets ready for the snap in the Central Florida Knight’s game against the UAB Blazers on Oct. 6.|Photo Courtesy of UCF Athletics

The Escambia County Blue Devils were clicking on all cylinders Friday night when they took the field against the Baldwin... read more