Huskey has learning experience as All-Star

Following a successful run to the AISA state finals, one Escambia Academy Lady Cougars volleyball player was selected to represent her school in the AISA All-Star Volleyball Game in Montgomery.

Huskey said the experience was different due to playing with a new team.

“It was a lot of fun to do,” Huskey said. “It was different playing with people that I don’t know and hadn’t competed with all year long. It was a good experience though to play with the other girls.”

Being chosen as an All-Star is something that all AISA athletes hope to do because only seniors are given the opportunity.

Huskey said her teammates were one of the reasons that she was selected.

“I couldn’t have been chosen with out the help of my teammates,” she said. “They are a great group of girls and they really helped me play up to my abilities. They set me up with great opportunities in our games. It really helped my season.”

In the match, the West squad was able to defeat the East team 3-2 with the fifth game deciding the match.

With her team getting the win, Huskey said she was pleased with how she played.

“I think that I played well at the game,” she said. “I had a couple of spikes and blocks and helped us with some pretty good serves.”

By playing with a new team and being coached by some different coaches, Huskey thinks her game was improved.

“I think it helped me with my ability to adapt to playing with different girls on the court,” she said. “The coaches were really nice and watched us do our bumps, sets and spikes. They also went over some drills with us. They made sure that every girl had a chance to play. It was a great experience that I’m glad I was able to have.” 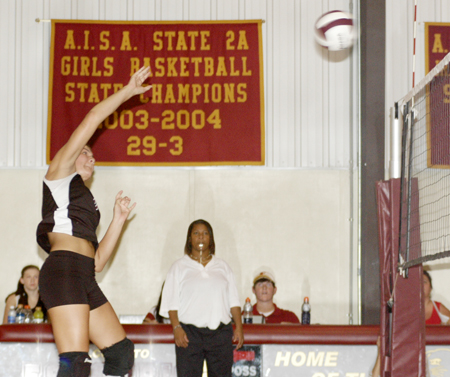 Escambia Academy Lady Cougar Amber Huskey was selected for the AISA All-Star Volleyball Game and helped her team to a win last Saturday.|Photo by Chandler Myers

Northview clinched a spot in the playoffs last Friday night after crushing the Vernon Yellowjackets 47-19 at the Chiefs’ stadium.... read more