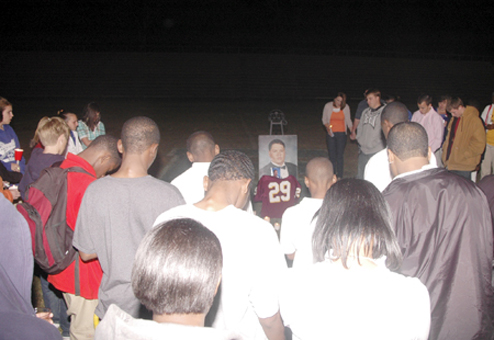 Students gathered for the candlelight vigil Wednesday night at Herbert Barnes Stadium in honor of William Casaday.|Photo by Adam Prestridge

Wednesday morning this community was hit hard with the news of coach William Casaday’s death.

As word spread, everyone from students to faculty to friends and family were given the news that not anyone could have expected that day.

Casaday was a lot of things to a lot of people. To some he was a coach who had guided them on the football or softball field. To some he was a teacher whose class they had fun learning in. To others he was a coworker that they enjoyed seeing on a daily basis at Escambia County High School. Beyond that he was a loyal friend who brought happiness into the lives he touched.

The impact that Casaday had at Escambia County High School and around Atmore was seen Wednesday night at Herbert Barnes Stadium. A large crowd of people gathered on the football field where he once coached to remember and honor the man they called a coach, teacher and friend, and honor him they did with a candlelight vigil that gave anyone who witnessed it an inside look into how he affected those he met.

One thing that was known about Casaday was his loyalty to his players not only for athletic purposes, but their educations as well.

He always made sure they were prepared on the field of play and in the classroom.

Last spring, he wanted his softball team to have a great season whether they won or not.

He ordered the Lady Blue Devils new softball uniforms and even had a program made for them with the help of this paper.

Casaday wanted the program to be perfect for his team and spent several afternoons checking on how it was coming along.

He wanted his team to have the best and his dedication proved that.

Another aspiration that he wanted for all of his athletes was the ability to move on to college whether they were playing sports or not.

If they wanted to play sports, he did what he could to make sure they had the opportunity and were seen by college coaches.

He would call coaches and find tryouts for them to have the opportunity to earn scholarships to help with their college education.

Last July, he was all smiles when Minikai Smith signed with Judson College.

“In the four and a half years that I have coached there have been a lot of guys and girls who have signed to play with colleges,” he said in the story about Smith. “During that four and a half years though, there hasn’t been anyone who I wanted it for more than Minikai. I wish her the best of luck, and think she will do great at Judson.”

His love for the college education of student-athletes should be carried on in the wake of this tragedy.

A memorial scholarship fund should be set up in his name to help student-athletes have necessary funds for college even if its enough for books.

After speaking with ECHS principal Zickeyous Byrd on Thursday, it seems the groundwork is being laid for such a scholarship.

Personally, anything that can be done to support it should be encouraged because of the worthy cause it benefits and the great name it will bear.

As with anything that we do, it’s always hard to say goodbye.

Goodbye Casaday, you will truly be missed.

Last football season was a a good season for the Escambia Academy Cougars and the Northview Chiefs. This year, the... read more