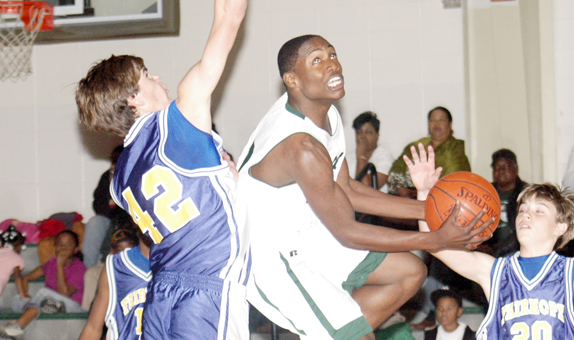 ECMS Eagle David Johnson puts up a layup against the Fairhope Pirates on Monday night at ECMS.|Photo by Chandler Myers

The Eagles (4-2) hurt themselves by shooting poorly at the free-throw line.

Eagles head coach Robert Smith said his team made too many turnovers and too many fouls.

“There were way too many turnovers by our team,” Smith said. “They hit their free throws and did a good job of hitting their three-point shots.”

The Eagles jumped out early leading 7-3 at the end of the first and continued to lead through the second quarter outscoring the Pirates 11-6 and taking a 18-9 lead into halftime.

Following halftime though, it was all Pirates as they outscored the Eagles 11-4 in the third quarter and 15-6 in the fourth period to win 33-25.

The Eagles were led by David Johnson’s double-double. Johnson scored 10 points and pulled down 10 boards. He also had three assists and three steals.

Nicole Johnson led the Lady Eagles to the victory as she recorded a double-double with 17 points and 10 rebounds. She also had five blocks and two steals.