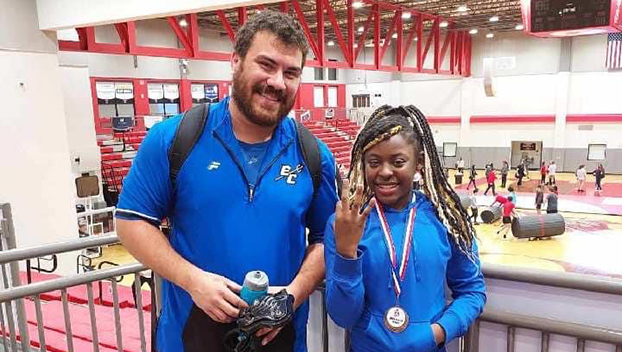 Spencer, an eighth grader, went 7-1 during the championship. She competed against 37 other girls in her weight class, the biggest in the tournament.

ECHS wrestling coach Joel Gonzalez said confidence was high during the first two matches because they knew they’d go up against MacDonald.

“We knew if we won those first two matches, we’d see (MacDonald),” Gonzalez said. “That went all the way to the third period. She (Spencer) pinned her in the last 20 seconds. It was neck and neck.”

Gonzalez said after the MacDonald match, Spencer was in the driver’s seat.

“Unfortunately, in wrestling if you make one mistake, that can end that match,” he said. “In the last match, she made a mistake, and she knew it. It was two pins after that, and she locked up third place.”

In total, Spencer pinned one girl in the preliminary round, pinned a girl in the championship bracket, pinned MacDonald, pinned two others and lost a match.

Gonzalez said he believes Spencer gained a lot of self -confidence after her appearance at the championship.

Gonzalez said Spencer has grappled with her teammates, and learned the sport quickly.

For next year, Gonzalez said the team has some unfinished business.

“I felt she could’ve won it,” he said. “It’s unfinished business next year. Hopefully we’ll have a bunch of girls behind her.”

While the girls’ season has winded down, the boys are still wrestling.

Escambia County competed in the Battle on the Bayou at Vancleave High School on Jan. 21. The Blue Devils defeated Davidson, St. Patrick’s and VHS, and fell to Ocean Springs (Miss.) and St. Martin.

The boys wrestling team will continue to compete in matches prior to the Class 4A South Super Sectional in Montgomery on Feb. 10-11.

The sectional is for individual wrestlers. The state duals is comprised of team versus team.