Escambia County Middle School’s eighth grade boys basketball team improved to 7-3 on the season with a win over the Spanish Fort Toros on Thursday night in Spanish Fort.

The Eagles (7-3) put up a monster second quarter to help pull off the victory.

In the first quarter, both teams had trouble finding points as they each scored six.

The second period of the game proved to be the difference maker as the Eagles dominated both ends of the court and outscored the Toros 21-6 to go into halftime leading 27-12.

Following halftime, the Toros won both quarters, but could not cut into the deficit the Eagles had already mounted.

In the third quarter, the two teams again could not score a lot of points as the Toros outscored the Eagles 7-6.

“We had a big second quarter,” he said. “Our pressure defense really helped us build a big lead. Our starting five put in a great performance.”

The Escambia County Middle School seventh grade Eagles picked up their second win of the season with a victory over the Pollard-McCall Wolves at ECMS on Wednesday.

The Eagles (2-1) crushed the Wolves by outscoring them in every quarter to win 35-14.

In the first quarter, the Eagles jumped out to a 9-3 lead.

ECMS followed their strong first quarter with another dominating quarter as they shutout the Wolves and scored eight points to lead 17-3 at halftime.

Following halftime, the Eagles continued to rout the Wolves with a strong second half.

In the third period, the Eagles scored 11 points and allowed the Wolves to get on the board again this time scoring nine.

The Eagles put the game away in the final quarter outscoring Pollard-McCall 7-4 to win 35-14.

Ladarrion Johnson led the Eagles with 11 points. He also had three assists and two steals.

Gaetlyn Thames finished with two points in the win.

The Escambia County Middle School eighth grade Lady Eagles improved to their record to 8-2 with a 21-15 victory over the Spanish Fort Lady Toros on Thursday night in Spanish Fort.

The Lady Eagles (8-2) led from start-to-finish with the first half being the difference maker.

In the first quarter, the Lady Eagles outscored the Lady Toros 6-2.

ECMS continued to lead in the second quarter as they pulled further ahead by adding eight points to the Lady Toros’ six to lead 14-8 at halftime.

Following halftime, the two teams continued to battle with the Lady Eagles holding strong to pick up the win.

In the third period, the Lady Eagles and Lady Toros both had trouble hitting their shots as they each only scored two points.

The teams tied again in the fourth period with each squad only adding five points to their total to give the Lady Eagles the 21-15 win.

“This win we got because the girls played well as a team,” she said. “Our practice at the free-throw line is also paying off.”

Ychelle Walker finished the game with four points and six steals, while Ashleigh Simpkins scored one point with two steals.

The Lady Eagles took control of the game in the second quarter leading 6-4 at halftime.

Following halftime, they continued to hold their lead as they were outscored in the third quarter 6-4 and won the fourth quarter 6-4 to pick up the 16-14 win.

NyIsja Poindexter led the team with 12 points and 10 rebounds. 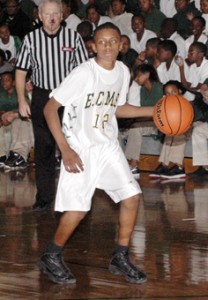 With a successful run to the quarterfinals in their rearview mirrors, the Escambia County Blue Devils were honored by their... read more