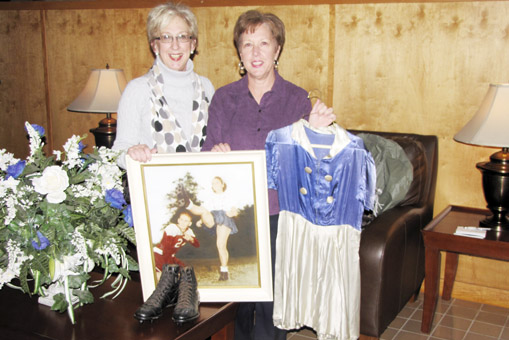 Luverne Wise-Albert’s daughters pictured, from left, Susan Moorhead and Toni McMuprhy show off their moms uniform, shoes and a picture of her kicking.|Photo by Chandler Myers

The administration at Escambia County High School is doing its part to continue the legacies of two influential people in its history with the establishment of two scholarships geared towards student-athletes.

On Monday, ECHS assistant principal Sarah Watkins announced the formation of the “Luverne Wise-Albert Award” and the “William Casaday Scholarship”.

The “William Casaday Scholarship” is named in honor of the late William Casaday, a drivers-education teacher and football and softball coach who died in an automobile accident on Nov. 10, 2010 in Baldwin County.

Both scholarships will be awarded to outstanding student-athletes who maintains a 3.0 grade-point average throughout his or her high school career. The only difference is the “Luverne Wise-Albert Award” will be geared towards female student-athletes.

On hand at the announcement on Monday were Wise-Albert’s daughters Susan Moorhead and Toni McMurphy.

Moorhead said her mother originally tried out for the team on a dare with some other female students. She added that once on the team her male counterparts looked out for her.

“She tried out on a dare with some other girls at school and wound up playing two years as a placekicker,” Moorhead said. “They watched over her. If anyone tried to tackle her they would take care of it.”

Both of Wise-Albert’s daughters said the award would make their mother excited.

McMurphy said her mom did not really speak of playing football when she was growinig up.

“I think she would think this is wonderful,” McMurphy said. “She didn’t think it was big deal when she played though. When we talked about her playing, we thought it was something all girls did.”

Moorhead said her mom would love the award.

“This would really tickle her,” Moorhead said.

The scholarship named after Casaday is focused on all student-athletes who are able to maintain a 3.0 grade-point average.

During his time at ECHS, Casaday was known for doing his best to get players scholarships to further their education and playing career.

Casaday’s father, Doug, said his son would be thrilled to see people supporting this scholarship because it would help students.

“He (William) would really appreciate people getting behind this,” Casaday said. “He spent much of his own money to work to get scholarships to kids at that school He was big on the arrangments of scholarships more than anyone else. He loved the kids and wanted to help.”

To make a contribution to either of the scholarships donors may make direct contributions to the “William Casaday Scholarship” or “Luverne Wise-Albert Award” accounts that have been set up at First National Bank & Trust in Atmore. All contributions are tax-deductible.

For more information about the scholarships, please call the school’s administration at 368-9181.

The Escambia County Blue Devils had to climb out of a hole against the B.C. Rain Red Raiders last Friday... read more