Atmore’s Lady Blue Devils were led by strong performances by Jasmine Ireland and Cha’Nae Lyles as they picked up their first win of 2011 by defeating the Monroe County Lady Tigers 51-42 on Tuesday night in Monroeville.

The Lady Blue Devils (6-10, 0-2) had to overcome the Lady Tigers’ defense focusing on their top scorer Diamond Williams to pick up the win.

In the first quarter, the Lady Tigers used the home court to their advantage as they jumped out to a 10-6 lead.

The Lady Blue Devils bounced back in the second quarter though outscoring Monroe 14-10 to go into halftime tied at 20.

Following halftime, the Lady Blue Devils ran with the momentum they picked up in the second quarter and pulled away from the Lady Tigers.

Escambia County took the lead for the first time in the third quarter as they scored 13 points to Monroe County’s eight and went into the final quarter ahead 33-28.

In the fourth period, the Lady Blue Devils extended their lead by outscoring the Lady Tigers 18-14 to pick up the 51-42 win.

Lady Blue Devils coach Lorenzo Jones said his team did a good job of overcoming the focus on Williams.

“On a night when they keyed in on our best player and top scorer, we had a couple of other players step up and do a good job,” he said. “However, we didn’t improve from the free-throw line and we missed a few lay ups. It was good to get a win. I hope we can continue to build on it.”

Ireland led the Lady Blue Devils with 17 points and also recorded eight steals, two assists and one rebound in the win.

Lyles added 16 points for ECHS to go along with five steals, one assist and one board, while Breanna Martin scored 10 points with nine rebounds, two assists and two steals.

Williams rounded out the scoring for the Lady Blue Devils as she posted eight points and had seven rebounds, three steals and an assist.

The Lady Blue Devils next game is on Tuesday, Jan. 18 at Saraland High School. Games begin at 4:30 p.m. 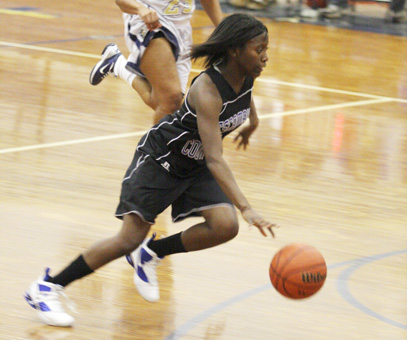