The Cougars of Canoe were in a tight battle with the Sparta Warriors for the first two quarters of their Tuesday night match up, but the second half proved to be the difference for No. 7 Escambia Academy.

The Cougars (12-0, 3-0) struggled with the Warriors early on in the contest only leading by two at halftime, but a run in the third quarter helped propel them to another win.

In the first quarter, both teams looked evenly matched as they fought up and down the court for points.

The Cougars were able to find a little more momentum than Sparta as they led 14-11 at the buzzer.

Escambia Academy’s slim lead was cut to two points before the half as the Warriors were able to get one up on them outscoring them 14-13 in the second quarter.

At halftime, the Cougars still led the Warriors 27-25 with a big half still to come.

Following the break, the Cougars found rhythm in the third period building a decisive lead over Sparta.

EA dominated the third quarter by locking down defensively and holding the Warriors to four points, while making their own shots to add 17 to their total to pull ahead 44-29.

The Warriors tried to battle back in the final quarter scoring 20 points, but the Cougars held their own putting 19 more points on the scoreboard to come away with a 63-49 win over their rivals.

Cougars Keaton Maher and Darron McGhee were important leaders in the win with both posting double-doubles against Sparta.

Maher led the team in points (15) and rebounds (14), while also recording two blocks and a steal; McGhee finished the contest with 14 points and 11 boards to go along with two assists and two blocked shots.

On the younger end of the roster, Cougars Jordan Sasser and Garrett Kirk each scored two points. Sasser also had one rebound, one assist and a steal, while Kirk posted three rebounds and a block.

Blake Quimby pulled down three rebounds for the Cougars. 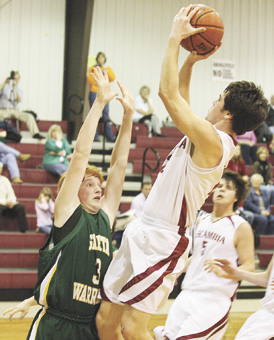 EA Cougar Tanner Kirk fades away on a shot during the Cougars’ win over Sparta Tuesday night in Canoe.|Photo by AJ Beachy

The Escambia Academy Cougars junior varsity squad escaped their game on Tuesday with a 43-39 victory over the Sparta Warriors in Canoe.

The Cougars held a firm grasp on the game early as they opened the game with a 16-6 run in the first quarter and led 26-18 at halftime.

Following halftime, the Warriors bounced back with an impressive 12-3 run in the third quarter, but down 30-29 the Cougars fought back in the fourth quarter to win 43-39.

A trio of EA Lady Cougars led the team to another area win on Tuesday night as the Academy defeated... read more