A trio of EA Lady Cougars led the team to another area win on Tuesday night as the Academy defeated their rivals, the Sparta Lady Warriors 63-43 at home in Canoe.

Taylor Helton, Amber Huskey and Grayson Emmons all finished in double figures for EA as they remained undefeated in their area.

The Lady Cougars (9-4, 3-0) battled with the Lady Warriors early, but had a big third quarter to help extend their lead and cruise to the win.

In the first quarter, the EA Lady Cougars came out of the gate with a strong performance on offense as they outscored the Lady Warriors 15-11.

Sparta narrowly won the second quarter as they outscored the Lady Cougars 14-13 to cut EA’s lead to three points as the teams went to halftime with the home team narrowly leading the contest 28-25.

Following halftime, the Lady Cougars opened up their offense and pulled away from Sparta with a strong third-quarter surge that helped them on their way to another area victory.

In the third quarter, EA’s defense tightened up as they held the Lady Warriors to seven points and added 17 to their own total to push into the final quarter leading Sparta 45-32.

Escambia Academy again pounded points onto the scoreboard in the fourth period as they finished the game on a powerful 18-11 run to earn the 63-43 win over their rivals.

“The first half was really close, but the girls opened things up in the third quarter and were able to earn an impressive win,” he said.

Helton and Huskey each finished the game with double-doubles as they both scored 14 points. Helton led the team with 19 rebounds, while Huskey pulled down 18 boards of her own.

Lady Cougars Lacie Flowers and Rachel Fuller each added eight points in the win. Flowers also had eight steals and three boards, while Fuller record a steal and a rebound.

Megan Duncan rounded out the scoring for the Lady Cougars posting two points. 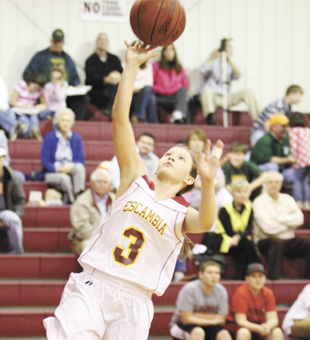 EA Lady Cougar Lacie Flowers puts up a layup on a fast break in the Lady Cougars’ win over Sparta on Tuesday night.|Photo by AJ Beachy

Blue Devil Tacorian Brown goes underneath an opponent to put up a shot during the Blue Devils’ win against Monroe... read more