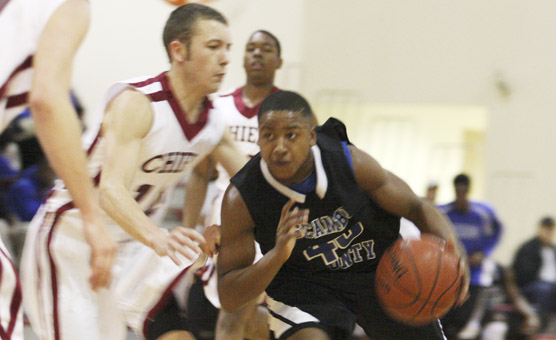 With the regular season area championship already clinched, the No. 7 Escambia County Blue Devils were able to focus on their out of area game against the Northview Chiefs on Monday night at Northview.

Blue Devils head coach Anthony Hayes the score does not reflect the effort by his team’s opponent.

“This game was a lot better than the score makes it look,” he said. “Northview fought hard the entire game and never once gave up. Our guys played a good game and we were able to play some younger guys to get the experience they’ll need once the area tournament starts.”

The Blue Devils opened the game on a strong run as they gained a comfortable lead in the first quarter outscoring the Chiefs 13-5.

Escambia County began dominating the game on both ends of the court in the second quarter as their lead grew to 23 points as they outscored them 24-9.

Following halftime, ECHS continued to run away with the game as they pounded the Chiefs in the second half.

In the third quarter, the Blue Devils fueled their lead with five more points as they outscored the Chiefs 15-10.

With a 52-24 lead at the start of the fourth, the Blue Devils dominated by holding the Chiefs to two points and scoring 16 of their own to come away with the 68-26 win.

Blue Devil Nayshawn Hartley led his team with 13 points in the win and recorded two rebounds.

The Blue Devils next game is Thursday night at home against the Robertsdale Golden Bears. Games begin at 4:30 p.m.