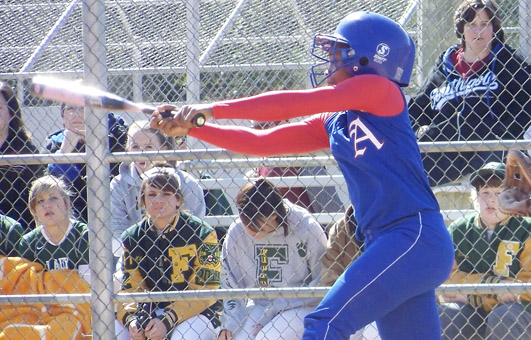 With just two weeks until the first game of the softball season, the head coach of the Escambia County Lady Blue Devils is looking to get in a much work as possible before the opener.

The Lady Blue Devils open their season on Tuesday, Feb. 22 with a trip to Robertsdale to take on the Class 6A Lady Bears.

Head coach Daryl Otwell said he is hoping the weather will be nice up until the first game, so his team can get in work on the softball field.

“Monday was only our third time to practice on the field due to the recent weather we have had,” he said. “Despite the poor conditions, things are going well, but we still have plenty of work to get in.”

After spending a week with his team, Otwell has been able to see what needs to be worked on and what is in good condition.

Otwell said one thing that he has been happy to see is the ownership his seniors take in their team.

“We have a lot of good leadership,” he said. “We have great seniors and they are coming together and want this season to be successful.”

Another strength of the Lady Blue Devils is the experience that some of them bring to the table.

Otwell said his seniors have shown they have what it takes to work hard because they played in summer leages.

“Our seniors played in the Poarch summer league, which is good experience,” he said. “It also shows they know how to put in the work and that work is paying off.”

The list of issues that faces this season’s team is longer than the positives, but Otwell is determined to have his team ready.

Otwell said his main concern comes with a lack of players on the mound.

“My main concern is the pitching depth,” he said. “We will be relying on one senior and an eighth grader, so we don’t have many options when it comes to that position.”

Aside from pitching, the weather has impacted the work that Otwell has been able to get in on team defense.

He said the basics are what he needs to get his team polished on.

“Defensively, we need to improve fundamentally to be ready for the first game,” Otwell said. “We also need to work on our bunt defense and how we defend small ball. That will be key this season.”

The only other issue facing the Lady Blue Devils this season will be finding power at the plate.

Otwell said he has players who can put the bat on the ball, but there is a lack of deep hitters.

“We have girls that can hit the ball, but we just have a few that can hit deep,” he said. “We need to develop more powerful bats as the season rolls on.”

The Lady Blue Devils open the 2011 season on Feb. 22 on the road at Robertsdale.

Friday’s senior night at Escambia County High School will be one that this year’s senior Blue Devils will remember always... read more