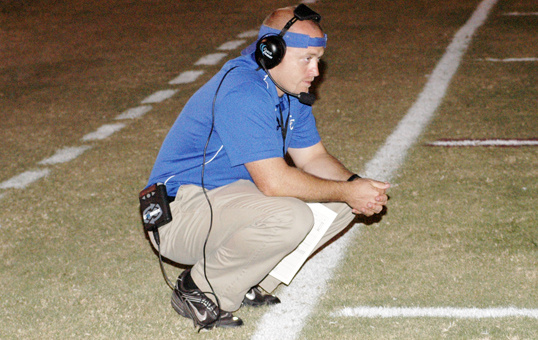 On Thursday, July 14, Escambia County head football coach Mark Heaton will be on another sideline coaching players from around the state.

Heaton has been selected to be an assistant coach for the South team in the North-South All-Star game to be held at the Cramton Bowl in Montgomery.

Heaton received the offer earlier this month from a representative with Alabama High School Athletic Association.

“Steve Bailey from the state office called me a couple of weeks ago and told me that based on what my team had done they wanted me to coach and asked if I was interested,” Heaton said.

The head coach of the South team will be Brent Hubbert from Maplesville High School.

Heaton met with Hubbert and the other coaches in a meeting last week where they divided up the duties.

“We all got together last week and divided up things and I’ll be coaching the offensive line,” Heaton said.

The next step for Heaton and the other coaches will be player selection on March 10.

The Blue Devils’ head coach is excited about the opportunity to coach in the game.

He said he knows several of his peers and knows they all had successful seasons in 2010.

“I know a lot of the coaches and they have put a great staff together,” Heaton said. “They choose the coaches on their teams’ performance and all of these guys had great seasons. It’s neat to coach with guys like that.”

The opportunity to be a part of the All-Star game is something Heaton atones to his staff and players.

He said without the hard work of his team then he would not have this chance.

“I’m excited about it and it’s a compliment to what our staff and kids do,” Heaton said. “Our players and coaches have done a tremendous job and they deserve the recognition for this more than I do.”

Heaton and the South team take on the North team at the Cramton Bowl in Montgomery on July 14.