Bell leads Cougars with no hitter 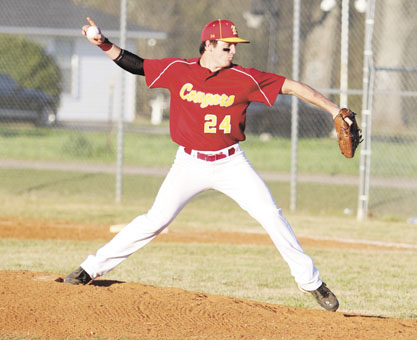 EA Cougars pitcher Reid Bell threw a no hitter on Tuesday against the Sparta Academy Warriors on Tuesday.|Photo by AJ Beachy

The Escambia Academy Cougars performed well during the week winning three games defeating the Central Christian Saints 16-3 on Thursday, the Sparta Academy Warriors 15-0 on Tuesday and the Santa Rosa Christian Eagles 9-3 on Monday.

The Cougars’ record now stands at 11-5 overall and 3-1 in region play.

Escambia Academy’s next game will be at Central (Fla.) High School in Allendale, Fla.

The junior varsity begins at 4 p.m. and the varsity follows at 6 p.m.

It took a stunning 15-run surge in the fifth inning, but the Escambia Academy Cougars were able to pull off their 11th victory of the season crushing the Central Christian Saints 16-3 on Thursday in Robertsdale.

The Saints jumped on top of the Cougars with two runs in the top of the first inning with Gabe Parker scoring on Alex Davis’ homerun.

The Saints added another run in the bottom of the second to increase their lead to three runs with Godwin making it around the base path.

The Cougars finally got on the board in the top of the third with Ryan Linam (0-for-1, R) getting on base and scoring on error during Jarrett Hadley’s (1-for-4, 2R) turn at the plate to bring the Cougars within two runs.

Bell had the highlight of the inning with a three-run dinger that gave his team their first lead of the game.

With the Cougars getting the final three outs in the bottom of the inning, they walked away with their 11th victory of the season.

Reid Bell was the star of the show in the Escambia Academy Cougars’ 15-0 victory on Tuesday afternoon throwing a three-inning no hitter against the Sparta Warriors at Sparta Academy in Evergreen.

Bell pitched all three innings of the game recording five strikeouts and only one batter reaching base due to an error.

The Cougars (10-5, 3-1) dominated the Warriors for the entire game with eight of their nine batters scoring a run in the win.

Leading 5-0, the Cougars went to work on defense in the bottom of the first inning with Bell leading the way by striking out two of the three batters in the inning.

In the second inning, EA continued their offensive surge by adding five more runs as Chason Roley (0-for-2, R), Hunter Bates (1-for-3, 2 R), Maher, Linam and Ross all crossed home plate to put the Cougars ahead 1-0.

Again in the bottom of the inning, the Cougars and Bell stopped the Warriors cold with Bell recording another strikeout.

The Cougars pushed the Warriors to the wall in the top of the third as they scored five runs to push their lead to 15-0 with Bell, Bates, Linam, Ross and Clayton Dyess (0-for-1, R) all scoring runs.

Escambia Academy put the nail in the Warriors’ coffin in the bottom of the third as they got Sparta to go three up and three down to end the game in three innings.

The teams battled through scoreless innings until the top of the fifth when Ross scored his second run of the game and Thompson (1-for-3, HR, R) his first off of a solo home run.

The Cougars added two final runs in the top of the sixth with Hadley adding his second run of the game, while Bell scored the Cougars’ final run with solo homer to put EA on top 9-0.

The Eagles managed to get three runs on the scoreboard in the bottom of the sixth, but it would be all they could get as the Cougars won the game 9-3.

Atmore children are in for a treat on Saturday, April 16 when the Atmore Area YMCA hosts its annual Healthy... read more