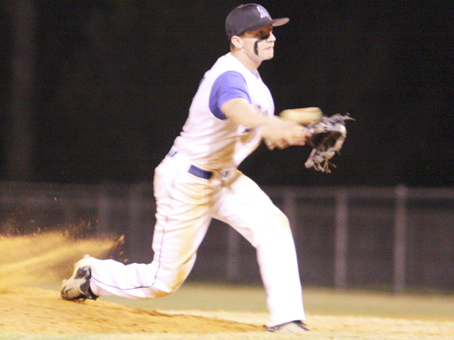 Escambia County’s Blue Devils baseball team dropped three games over the weekend to the UMS-Wright Bulldogs falling 11-2 and 14-2 on Friday and 14-0 on Thursday.

The Blue Devils (0-18, 0-6) were unable to generate much offense against the Bulldogs and were on the bad end of a perfect game on Thursday thrown by a Bulldogs’ pitcher that is already committed to play baseball at Auburn University.

The Escambia County Blue Devils were beaten 11-2 by the UMS-Wright Bulldogs in the second game of a doubleheader on Friday in Atmore.

The Blue Devils (0-18, 0-6) fell behind early and were unable to overcome the deficit put on by UMS-Wright.

In the first inning, the Bulldogs got on the board with three runs and added another in the top of the second inning.

Trailing 4-0 in the bottom of the third, the Blue Devils got their first run across the plate with Montez Curry scoring.

The Bulldogs then went back to workin the top of the fourth and added their fifth run and folowed that up with two more runs in the fith inning and one in the sixth.

In the bottom of the sixth, the Blue Devils got another run on the board with Nieko Williams coming across the plate.

The Bulldogs put the game away in the seventh inning with three more runs scoring to end the game after the Blue Devils side went down in the bottom of the inning.

The UMS-Wright Bulldogs defeated the hosting Escambia County Blue Devils 14-2 in the first game of a doubleheader on Friday night in Atmore.

The Blue Devils (0-17, 0-5) opened the game strong, with two runs, but were unable to follow up in later innings.

The Bulldogs took the lead in the first inning with three runs scoring, but the Blue Devils responded with Nick Flowers and Marshall Roling coming across the plate.

After a scoreless second inning, the Bulldogs took over scoring two runs in the third, six runs in the fourth and three runs in the sixth inning to earn the victory

A man becomes a legend

A man became a legend on Tuesday morning and with that man went a piece of my childhood. Constantine “Gus”... read more