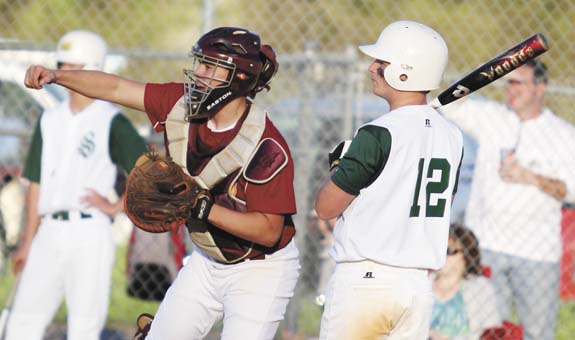 EA catcher Jacob Fields attempts to throw out a baserunner during a Cougars game earlier this season.|Photo by AJ Beachy

Reid Bell picked up another win on the mound for the Escambia Academy Cougars on Tuesday as the Cougars defeated the Jackson Academy Eagles 14-6 on Tuesday at the athletic complex in Poarch.

The Cougars (13-5, 4-1) dominated the contest early picking up several runs and held off the Eagles in the late innings of the game.

In the top of the first, the Eagles took the lead 2-0 as Chancey and Ramey each crossed the plate.

The Cougars responded by tying the game in the bottom of the inning with Jarrett Hadley (2-for-3, 3R) and Hunter Bates (2-for-3, 3R) each crossing home plate.

The Eagles added three more runs in the top of the second with Marks, Chancey and Donald each making their way around the basepath. Heading into the bottom of the inning, the Cougars trailed 5-3.

With a 11-5 lead, the Cougars defense went two work holding the Eagles scoreless in the third, fourth and fifth innings.

The Cougars meanwhile, added a run in the third with Bates scoring his third run of the game to put EA on top 12-5.

In the bottom of the fifth, Escambia Academy added their final two runs with Hadley scoring his third run and Roley his second of the game to put EA on top 14-5.

The Eagles scored one final run in the top of the seventh with Donald scoring his second run of the game to put the final at 14-6.

Escambia Academy’s next game will be on Tuesday at home against Clarke Prep. Games begin at 4 p.m. with the junior varsity.