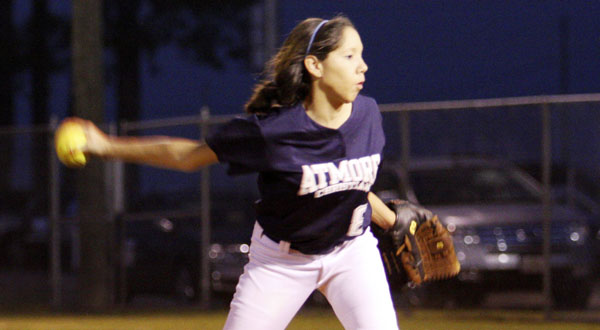 Atmore Christian School’s Lady Rams let a 4-0 lead slip away on Tuesday as they were defeated 6-5 by the Central Christian School Lady Saints at Houston Avery Park in Atmore.

The Lady Rams dominated the first four innings of the game, but allowed the Lady Saints to creep back into the lead in the sixth inning to come away with the victory.

Atmore Christian held the Lady Saints scoreless in the top of the first inning and took the lead in the bottom of the inning with four runs scoring.

The Lady Rams held their lead through the first four innings, however, the Lady Saints did get a run to pull within three.

In the top of the fifth, Central Christian tied the game at four by scoring three runs on the Lady Rams and then took the lead in the sixth inning with a run and added their sixth run in the seventh inning.

The Lady Rams pulled within one run in their final turn at the plate, but could only get one run across to fall short of a comeback losing 6-5.

“I am very proud of the way our girls came out and jumped on the bats early in the game,” she said. “Central Christian has a strong offense, so getting the lead early was beneficial. We had a few defensive errors throughout the game, but overall the girls responded well to Central’s strong bats. Our girls have made huge improvements individually and as a team this season. It’s a blessing to coach girls that have a genuine desire to push themselves to their best.”

The Lady Rams next game will be on Monday at Alethia in Pensacola, Fla, beginning at 4 p.m.

In the first four and a half innings, the Lady Rams used their offense to take a commanding 10-4 lead, but allowed the Lady Conquerors to score eight runs in the bottom of the fifth to take a 12-10 lead.

Atmore Christian came back in the top of the seventh scoring six runs to grab the lead 16-12 and held off the West Florida in the bottom of the inning to win.

Kendra Beachy led the Lady Rams on the mound striking out nine batters.

Offensively, the Lady Rams were led by Taylor West and Madelyn Boatwright who each went 3-for-4 with three singles, while Narisa Wiggins hit 3-for-6 with two singles and a triple in the win.

Those interested in riding trails through Baldwin County are in for a treat on April 30 when the Escambia Academy... read more