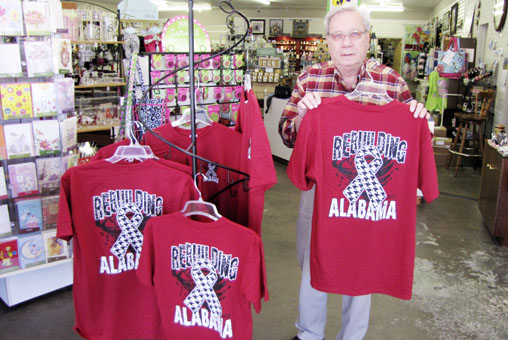 Country Charms owner Joe Brown displays some of the “Rebuilding Alabama” T-shirts that his shop is now selling.|Photo by Sandi Boone

Country Charms is now selling T-shirts aimed at helping the State of Alabama following the devasting storms that tore through several towns throughout the state last month.

The T-shirts, which cost $17.99, are red with a houndstooth ribbon on them and say “Rebuilding Alabama.”

Country Charms owner Joe Brown said the shirts have been selling well and the proceeds go to the Red Cross.

“We have already almost sold through the first order,” Brown said. “This is a great cause because we have been helped before, so now it’s time for us to help. The money raised with the shirts goes to the Red Cross and the relief efforts going on throughout the state.”

School is nearing the end of the 2010-11 year and students will soon be back on summer break. With summer... read more