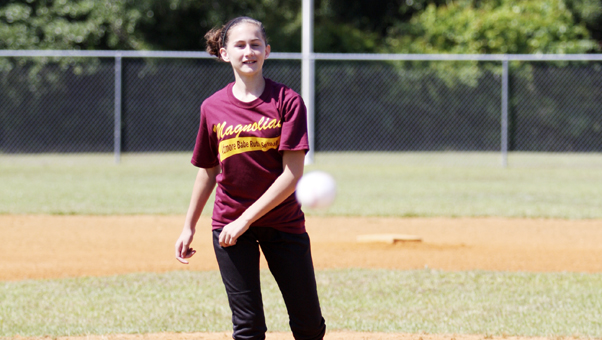 Saturday marked another opening day for the Atmore Cal Ripken baseball season as five teams in the National League began their quest for a championship.

Hundreds of people turned out for the leagues opening ceremonies and to cheer on their family members and friends when they took to the field for the first day’s games.

Following a successful opneing day, action continued on Monday night with two more games between the Cardinals and Padres and the Tigers and Mariners.

The Cardinals opened the game at the plate and quickly went to work scoring three runs with Dee Dee Poole (0-for-1, 2R), Dagon Hadley (2-for-3, 3R) and Fred Flavors (1-for-2, 2R) all crossing the plate.

Trailing 14-0, the Padres were unable to score any runs in the bottom of the second with only Daylon Wooten (0-for-0, BB) the only batter to reach base through a walk.

In their final at-bat, the Padres would come close to scoring a run, but were unable to get Tyler Sells (1-for-2) past third base giving the Cardinals the 14-0 win.

The Tigers played strong in the second and third innings to erase an early deficit to come back and win 8-2 over the Mariners.

The Tigers first trip to the plate was rough with their first three batters going down to strikeouts leaving them down by one run.

Poarch’s Mariners had an opportunity to add three more runs to the scoreboard in the top of the second inning with Trent Dacus (0-for-0, BB), Tanner Jackson (0-for-0, BB) and Dakota O’Barr (1-for-2) getting on base, but a third strikeout ended the scoring chance.

The Mariners pulled within one run of the Tigers in the top of third inning as McGhee scored his team’s second run of the game leaving them down 3-2.

The Tigers extended their lead and pulled off the victory in the bottom of the third as Thorpe, Quimby, Wilson, Jose Lopez (0-for-1, R) and LaShawn Robinson (0-for-0, R) all crossed the plate earning their team an 8-2 win.

The Cardinals struck first in the bottom of the first inning with all nine batters scoring atleast one run to give them a 13-0 lead at the end of the inning. Runners scoring included Dee Dee Poole, Dagen Hadely, Fred Flavors, Brandon Cummings, Jabrice Hooks, Jared Gibbs, Evan Tatum, Devon Robinson and Tristan Kilpatrick.

The Mariners got on the board in the top of the second with Xan McGhee and Tanner Jackson scoring making the score 13-2.

In the bottom of the second, the Cardinals added six more runs as Hadley, Flavors, Cummings, Hooks, Gibbs and Tatum each crossed home plate putting their team on top 19-2.

Dakota Rolin and Cole Wynn scored runs in the top of the third, but it would not be enough for the Mariners as they fel 19-4.

The First National Bank & Trust Athletics and Atmore Rotary Club Tigers battled in an opening day match up on Saturday at Tom Byrne Park with the A’s winning 13-9.

The Tigers got on the scoreboard first with Jordan Britt touching home plate to put his team up 1-0, but the A’s responded with four runs as Nytorious Cooler, Gayton Thames and Eric Williams all scoring.

In the second inning, the A’s extended their lead to 8-1 with David Richardson, Shawn, and Williams each touching home plate.

The Tigers pulled within five runs in the third inning as Justin Walden and Christian Thorpe each scored runs, but the A’s extended their lead again in the bottom of the inning with Shawn, Thames and Richardson scoring runs.

After the Tigers scored run with Tyler Wilson, the A’s scored their final two runs as Jamaya Frye and Josh Booker scored to put them up 13-4.

The Tigers then become to try and come back scoring four runs in the fifth with Britt, Walden, Quimby and Wilson all scoring, and Jackson Breckenridge scoring in the top of the sixth to score his team’s final run.

The Athletics dominated the game leading 9-0 before the Padres scored their first two runs of the game in the third inning.

The A’s scored one run in the fourth inning and three in the fifth inning to give them a 13-6.

The Padres begin battling back in the fourth inning scoring two runs and coming up with two more runs in both the fifth and sixth innings giving them a 13-8 loss.