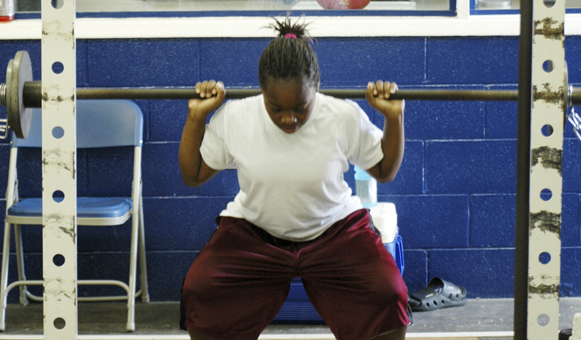 Escambia County High School Lady Blue Devils basketball and softball player Jasmine Ireland gives her all during squats at the workouts at ECHS on Tuesday morning.|Photo by Chandler Myers

Summer workouts have taken on a whole new meaning at Escambia County High School as athletes with each of the school’s major sports are taking part in a strength and conditioning program.

Male and female athletes are coming to the school’s weight room in the hopes of improving their team’s competitiveness when their respective seasons come around.

An active strength and conditioning program is one of the goals that ECHS athletic director Mark Heaton set when he took over the Blue Devils athletics, he said.

“This is one of the main objectives that I had when I came to ECHS,” Heaton said. “I wanted to get all of the coaches on the same page, so that each sport could take part in strength and conditioning.”

With athletes for football, baseball, basketball and softball working out consistently during summer break, the coaching staff at ECHS is wanting to build stronger programs in each sport.

The workouts also give the coaches and players to build more chemistry among themselves.

The coaches get a chance to show the players that they care and want them to be the best they can be, Heaton said.

“There are so many benefits to having a program set up for this,” he said. “It gives the players a chance to improve themselves as athletes, but it also gives the coaches a chance to show their players that they want them to be there. That connection for the coaches and players is important. I know that I try to show my players that I want them to be at the workouts, so they know they are a part of something special because I care about each of them.”

Another benefit of having a strength and conditioning program in place is the improvements that could happen with each program.

It’s the same recipe that other winning programs have installed to increase their success, Heaton said.

“If you want to be competitive then you have to have the right type of system in place,” he said. “Having these athletes come out and work their tails off shows the motivation that they all have. That’s what the championship-caliber teams do, and it’s how you build winning teams. We want to have competitive programs, so we will continue to stay the course with this program.”

With this being the first summer that the Blue Devils are taking part in the strength and conditioning program, the athletes are taking it in stride.

More than 100 athletes have been coming to workouts on a consistent basis, according to Heaton.

“Things have been good for it to be so early in the process,” he said. “I’d say that we have 100-plus kids taking part in these workouts. It’s tremendous for our athletes, coaches and community to have this. It just proves that the right things are happening here. It’s going to help us be competitive.”

Escambia Academy opens the season on Aug. 19 with a game against Sparta Academy.|File Photo Leadership is the term that... read more