ECHS looking for players to step up 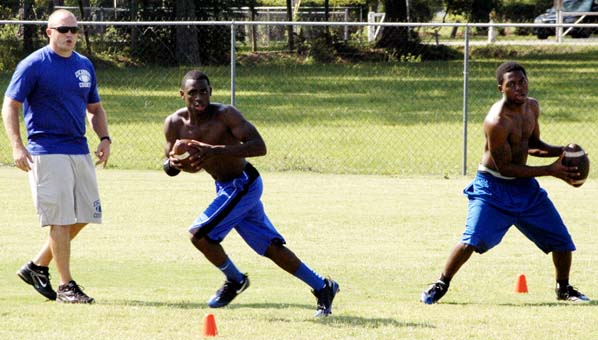 ECHS head coach Mark Heaton works out two of his varsity quarterbacks during workouts on Thursday morning.|Photo by Chandler Myers

With the 2011 season on the horizon, the Escambia County Blue Devils are working to be strong and conditioned when practices begin on Aug. 1.

The Blue Devils are using their summer strength and conditioning program to work out the mental and physical aspects of playing football, but also looking to replace key pieces of their 2010 squad.

With so many key players being lost to graduation, the Blue Devils coaching staff has gone to work looking for the right players to fill each spot.

With just two full weeks of summer workouts left, head coach Mark Heaton and his staff have eyes on some players who might make the jump to the starting lineup, according to Heaton.

“We are working hard to see what guys are ready to step up and contribute,” he said. “Several of our guys have made strides that could help them push their way into the starting line up or at least get them a ton of playing time.

Defensively, the Blue Devils are secure up front with the team’s Top 2 defensive linemen returning, but the worry begins in the secondary.

Brown and Rolin were two of the most important pieces of the 2010 defense, Heaton said.

“With T.C., you are talking about a guy who led our teams in interceptions last season,” he said. “He was always around the ball. Marshall Rolin was our every down corner and he is the best open field tackler that I have ever coached and might every coach. Replacing those two guys will be huge because of their talent on defense.”

Offensively, the Blue Devils are looking for several new pieces with their backfield gone as well as three offensive linemen.

Starters such as Dylan Broadbent and Rico Stallworth will be tough to replace because of the intangibles they brought on the field, Heaton said.

“We lost Broadbent, Robert Poole and Keon on the line, which will be important to fix quickly,” he said. “Dylan was such a smart kid and a great guy to be around. Those are the tough players to replace. Rico was just an athlete who started at quarterback for several years. With Chris Johnson though, we are ahead of the curve because he has started several games already.”

As practice approaches, the Blue Devils coaching staff is preparing each player for the role they will take on.

Finding those key contributors will be the focus, Heaton said.

“Our main focus is to develop each and every one of our players,” he said. “We need to find guys who are going to step up and be leaders. If we can find a strong group to do that then we will find success.”