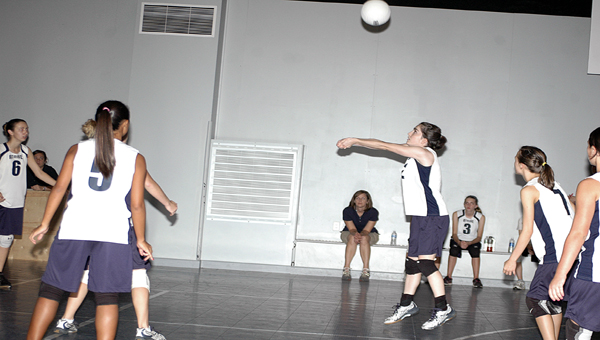 Aimee Jurjevich hits the volleyball in a match

The two teams exchanged scores back and forth in the first set and broke the 30-point mark for both teams before the Lions managed to defeat the Lady Rams 32-30.

Among the positive for the Lady Rams, senior outside hitter Narisa Wiggins had four ace serves and one kill in the second set, while Grace Kilcrease had an ace serve and three kills and Brianna Pearson chipped in four kills.

The Lady Rams trailed the entire third set and wound up losing it by a score of 25-15. However, three freshmen were all able to see critical playing time and contribute to the team. Pearson had three more kills, Kelsey Baker had two assists, and Kaylynn Swartzentruber had an ace serve.

The loss dropped ACS to a 2-2 overall record with all of its games so far being conference games. The team’s next game and first non-conference game will be Thursday Sept. 13 as the Lady Rams travel to Fort Walton Beach to play Calvary Christian School. The JV game is slated to begin at 5 p.m. and the Varsity game will follow around 6 p.m.