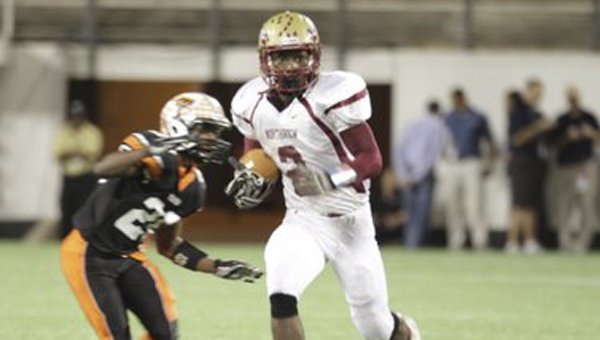 Northview running back La'Mikal Kyles was a big factor in the Chiefs first ever state championship win Friday night in Orlando.

The trip from Bratt to Orlando is more than 480 miles, so the Northview Chiefs weren’t going to let this opportunity go to waste. Playing in their first ever state championship, the Chiefs beat a previously undefeated Trenton team in commanding fashion 42-21.

On the very first play from scrimmage, Northview’s Stetson Nash made a big tackle for a loss. Later in the drive, Neiko Robinson made an interception.

The team got to the one yard line, but a fumble gave the ball back to Trenton. The defense held strong before the offense took control.

The Chiefs took the early lead on an impressive LaMikal Kyles 58-yard run to put the score at 7-0.

On the ensuing defensive possession, Trenton appeared to be going for fourth down with only a yard needed but Northview got the Trenton offensive line to move early, forcing a punt.

Trenton had a big punt that backed Northview all the way to the one yard line. Once again, Trenton was called for being offside and had to punt it again.

This punt didn’t go as well. Northview’s Arkelle Elliot blocked the punt and teammate Chad Smith recovered the punt and carried it 20 yards for another Northview touchdown, giving the team a 14-0 lead.

Several plays before Kyles’ touchdown, the team was able to draw Trenton offside to go from a fourth down and two to a first down. Trenton continued to draw offside penalties throughout the first half.

Northview got Trenton to turn the ball over three times in the first half through interceptions. Neino Robinson was next in line. He returned an interception 39 yards for what initially appeared to be a touchdown, although it was called back due to a call of blocking in the back.

LaDarius Thomas still managed to put the points back on the board with a two yard rushing touchdown to push the Chiefs lead to 21-0.

LaMikal Banks stopped the ensuing Trenton drive short with an interception inside the goal line just before halftime.

“Often times, when you get a couple good football teams together it boils down to turnovers,” Northview head coach Sid Wheatley said following the game. “We won that battle tonight.”

At the start of the second half, Trenton finally began to see a sustained running attack without crippling penalties. Trenton running back received handoff after handoff, or more often, pitch after pitch and managed to score on a three yard rushing touchdown. However, Trenton did have to use two timeouts on the drive.

Just when it seemed like Trenton had picked up momentum the team was penalized twice on the kickoff. The initial strategy was kick the ball short and out of bounds, but Northview was able to challenge such a move and force them to kick it over. So, they decided to go with a more traditional kick and the move did not work out.

Neino Robinson did as he has done all season when opposing teams allow him to make returns on special teams: scored a touchdown. Robinson managed to find all the right gaps to return the kickoff 80 yards for a touchdown that increased Northview’s lead to 28-7.

“Both of them had outstanding nights,” Wheatley said of the Robinson brothers. “[Trenton] run the ball really well. I think they averaged almost 400 yards a game. Neiko really helped us with run support from the safety spot. He did come up and have some big licks and had the big interception on the first drive where they had the ball. They kicked the ball out of bounds twice to try to keep it away from our deep guys. We made them back up a couple times and finally they brought in another kicker and he decided to kick it deep and [Neino] made them pay. Any time that guy gets his hands on the ball, he can go the distance. Obviously, he did tonight. That was huge.”

On the next defensive possession, Trenton fumbled and Northview took advantage of the turnover. Brannon Freeman scored a 28-yard rushing touchdown to increase the Northview lead to 35-7. Quarterback Kevin Vaughan made an outstanding block that gave Freeman the running room to score the touchdown.

A few drives later the Trenton rushing attack once again found some success. Breon Sims carried the ball into the end zone for a one yard touchdown to cut the lead to 35-14.

Kevin Vaughan answered on the next Northview offensive drive by rushing for a six yard touchdown to essentially seal the game for Northview with the score 42-14 in the fourth quarter.

Trenton quarterback Stephen Smith found some success running the ball in the fourth quarter, although he struggled passing the ball finishing with only two completion on eight attempts and throwing three interceptions. Cedric Stokes broke several tackles for a 23 yard gain to put the Tigers at the three yard line. Two plays later, he scored from two yards out to put the score at 42-21.

“I’m so proud of these kids,” Wheatley said. “There’s not a more deserving bunch that deserve this night, this moment, this championship. They really went to work and really bought into our system and what we were trying to sell. When we got to the game and they were on the biggest stage, they performed and they really won it tonight. I’m very proud of them.”