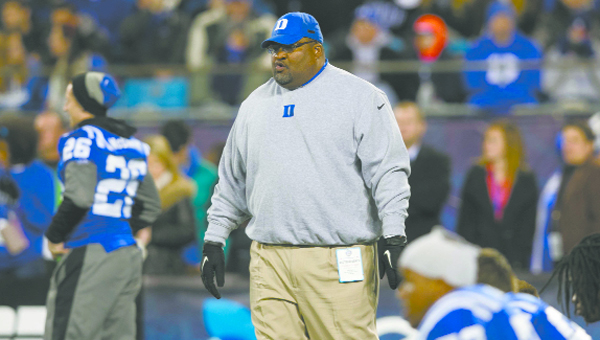 Ron Middleton was born to coach.

The Atmore native and 10-year National Football League veteran and Super Bowl champion said he prefers coaching to playing because he enjoys the teaching aspect.

“I enjoy the gratification of seeing a player doing something you taught him to do,” he said. “Playing was the easy part.”

The 1982 Escambia County High School graduate will take that attitude into his new job as tight ends and assistant special teams coach with the Jacksonville Jaguars after five years with Duke. He was hired on Feb. 7.

“I’m excited,” he said. “I’m here with a new head coach and a new general manager that are hungry.”

Middleton said he’d coached with Jaguars head coach Gus Bradley before with the Buccaneers and jumped at the opportunity to join his staff in his first year.

“The opportunity came along and he asked me to come with him,” Middleton said.

This is the newest chapter in a career that started in seventh grade when Middleton was playing at recess, which is how he “lucked in” to football.

“I was being chased at recess in seventh grade,” Middleton said. “Coach (Melvin) Middleton was signing people up for football in the gym and I ran in there. He told me to sit down and sign up.”

The 47-year-old added that the coach was also “instrumental in keeping me playing” in high school.

“In ninth grade I was going to quit and play in the band,” he said. “He persuaded me not to.”

Middleton went on to play tight end at Auburn for coach Pat Dye. While a Tiger he blocked for running back Bo Jackson.

“It was fun,” Middleton said of blocking for Jackson. “It made my job easier. I didn’t have to hold my blocks for long.”

Middleton spent the majority of his NFL career with the Washington Redskins, winning a Super Bowl in 1991.

He retired in 1995 and became a co-owner of a telecommunications firm, but he couldn’t stay away from football and in 1997 began as an assistant coach at Troy University.

“After I retired I missed it,” Middleton said of football. “I didn’t want to do anything else. It’s a great way to still be a part of it.”
After two seasons at Troy, Middleton moved on to the University of Mississippi, where he coached for five years.

In 2004 he took a job at the tight ends and assistant special teams coach for the Tampa Bay Buccaneers.

In 2007 he was hired by Nick Saban at Alabama, an experience that only got weird once for the Auburn alumnus.

“It only got strange the one time we went to play them,” he said. “Other than that it was fine.”

Middleton spent the last five seasons at Duke until taking the position with the Jaguars in February.